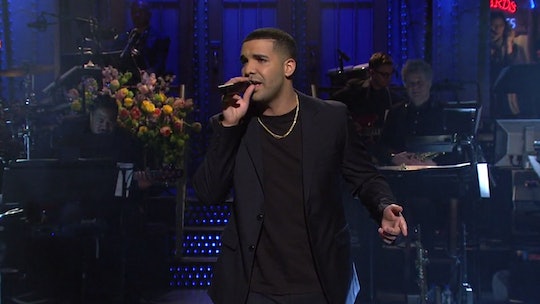 It seems like Drake has been everywhere these days. From the top of the iTunes charts where has has resided since the release of his newest album, Views From The Six (until Meghan Trainor kicked him off the top spot) to radio stations where his song "One Dance" has been getting a ton of air play. But the place you've seen him the most? The Internet — where it feels like on every corner or webpage there is a Drake meme waiting to greet you. So it is no surprise that Drake's meme song on Saturday Night Live was both hilarious and incredibly accurate.

Drake played double duty both hosting and performing for his second time during Saturday Night Live's Saturday night broadcast. The artist performed two songs, "Hype" and "One Dance" off of his newest album and also showed off his acting and comedy chops — which were pretty damn good. But before he could show off just how good he was to audiences everywhere, Drake had to deliver his opening monologue which was something people will be talking about for weeks to come.

The monologue started out quite simply: Drake came out (with his freshly shaved and controversial face) looking sharper than ever and started delivering the jokes, looking and acting like a complete natural on stage. Then he hit audiences with his meme song.

"You'll have to excuse me if I'm a little upset," Drake said in his monologue. "Back stage, right before I came out, my friend showed me this meme he found on the Internet and it really shook me."

In his song, Drake tells a story of just trying to hang out with his friends when someone has to bring up the fact that they saw a meme of him on the internet. Then, Drake goes through describing all of the memes which is pretty hilarious.

"It feels like a bad dream, because I got turned into another meme," Drake sang.

As Drake sang, images of Drake memes popped up on the screen. One referenced Drake's days on Degrassi, another superimposed Drake's beard and hair on Obama's face and body with the caption "Drizzbama."

"How am I gonna explain to my mama when you've got my beard on Obama?" Drake asked in his song.

Whats funny about this song is that it is completely accurate. It seems like shortly after the release of "Hotline Bling" and the release of its music video in November, you could not escape the Drake memes. I have to admit, they were all kinds of funny, but what makes Drake more meme-able than the rest of the celebrities out there?

More recently, with the release of Views From The Six, a miniature sized Drake is pictured sitting on top of Toronto's CN Tower. This image inspired hundreds of people to meme this image of Drake and photoshop him sitting in different places; even Jimmy Fallon brought it up on his talk show this past week.

"I'm not just a picture, I have feelings too, so how would it feel, if it happened to you?" he asked the audience. There is no denying that the Drake memes are incredibly funny, so it is just as great that Drake acknowledges this. Especially on a show like Saturday Night Live that openly asks its guests to make fun of themselves. Don't worry Drake, I love you for your music and your memes.