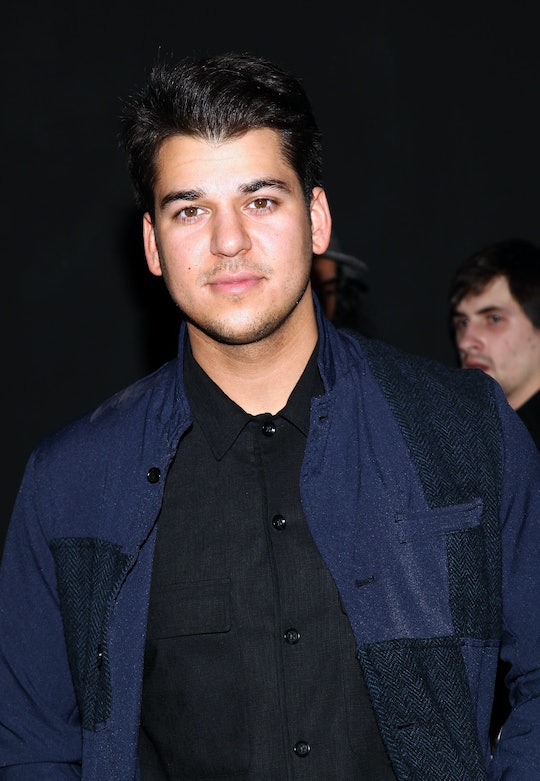 Rob Kardashian turned 32 on Sunday, and he celebrated with family at a themed bash. And Dream Kardashian's birthday celebration for dad Rob may have come a bit early, but it's still the cutest thing you'll see all day. Khloé Kardashian shared photos and videos from the bash on Instagram so fans could experience the fun from far and away.

The party took place on Saturday, as Khloé revealed on social media. The 34-year-old wrote in one video, shared on her Instagram Story, "Dreamy Dream wanted to throw her daddy a special birthday party before she goes to see her mommy," according to People. She added that although Rob's birthday is on Sunday, Dream was able to get "her cousins together to celebrate." She shared several photos from the event, according to People, including a cake covered in shamrocks and matching green decorations. Khloe didn't share any pictures of Rob at the party, but did post two different pictures of Dream sitting next to the birthday cake, which said, "Happy Birthday Daddy."

In the pictures, Dream was all smiles. She wore a green shirt with Minnie Mouse on it. The tiny Kardashian paired the look with matching green and grey shamrock leggings and green shoes. She was photographed in the pictures playing with her cousins, including Khloé's daughter True. Per People, the kids appeared to be playing on a small slide inside the house. Khloé praised her niece's party planning abilities, writing, that she's "great at throwing parties!"

"Thank you Dreamy! She picked out the decorations, created the invite list and everything," Kardashian wrote. "Get ready Rob for another party on Sunday."

On his actual birthday, Khloe shared photos as well as footage that appears to be from an upcoming episode of Keeping Up With the Kardashians. It shows the family celebrating Rob's birthday, and even features an appearance from the reclusive Kardashian brother. Kris Jenner, Kourtney Kardashian, Kim Kardashian, and other members of the family. Like the party Dream threw for Rob, the bash appeared to be St. Patrick's Day-themed. Kris even joked at one point, "It looks like a leprechaun threw up in here."

Although Dream's mother, Blac Chyna, wasn't at the party, she and Rob are reportedly in a much better place and are co-parenting together. Rob shared the news on Twitter in February. It came amid months of confusion about the state of their relationship after Chyna filed a lawsuit against Rob, mom Kris Jenner, and sisters Kourtney Kardashian, Kim Kardashian and Khloe, as Bravo reported. Rob said in a tweet that the suit had been dropped.

"Angela and I are both actively co-parenting and there are no pending or active custody cases," he wrote on Twitter, prompting Chyna to respond, "Robert and I only concern is what's in the best interest of our daughter that we both equally love. Additionally, Robert is a wonderful father to our Dreamy!"

Kardashian has been largely out of the public eye lately, and doesn't have a strong social media presence. He does often share photos of Dream on Twitter, however. He posted a picture of her on Jan. 18 and a couple more in February. His other tweets are largely sports and family-related.

Happy birthday, Rob! Here's hoping you had fun with the little ones and have a great celebration on the day itself.