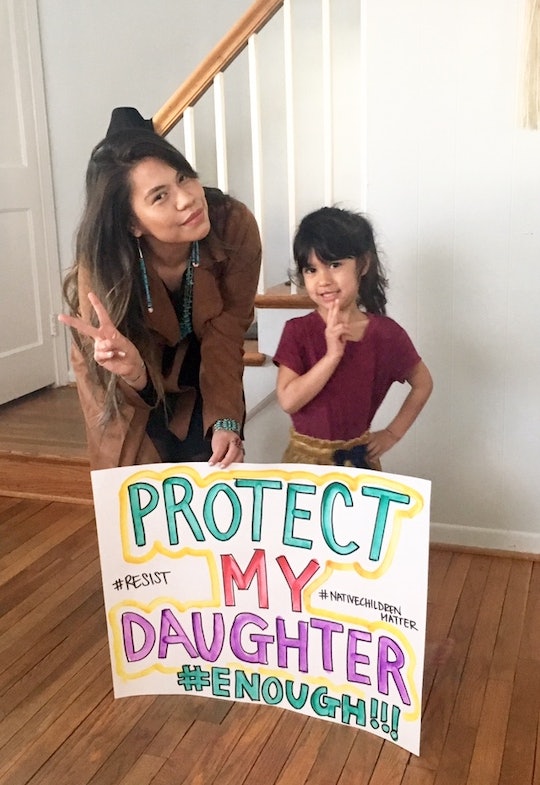 Fellow Parents, Please Don’t Let Your Kids Dress Up As "Indians" At School

Last year, my daughter’s preschool decided to have a Thanksgiving party. I reached out to the director of the school to let her know that our family is Indigenous and that I would love to come talk to the class about what that means. I anticipated a smooth interaction, one woman of color to another, but she told me that as she herself was “part Indian” (1/30th Cherokee, she said), she did not need my input or guidence around what the children need to know or what would be considered offensive. Needless to say we took my daughter out of that school and they proceeded to have their Thanksgiving party, complete with construction paper headdresses, tomahawks and facepaint. This isn’t an unusual occurrence — these kinds of “parties” happen every year — but parents need to understand why it’s not OK to dress kids up as “Indians” for Thanksgiving.

Late November was always a mixed bag for me as a kid at a public school in the ‘90s. This was the only time of the year I would ever hear anything about my own culture, and I was so proud to tell my teachers and class that I was Native American. I wanted to share pieces of my culture and be seen. Sadly, I found at a young age that it was hard to redefine what an ”Indian” or, more appropriately, what a Native American is to a large group of mostly white peers and teachers, when the entire educational system supported a generalized and romanticized view on a group of people that encompasses over 500 recognized tribes in the United States.

People think Native Americans exist in the past. They do not want to accept that we are still here, and that our regalia still has meaning or is still worn.

People get very offended when you challenge their version of “Indian.” Demystifying the Disney characters and professional sports team mascots they have a connection to, and challenging the word of distant relatives that may or may not have Native blood — many times the blood of an Indian princess or Indian chief (OK) — can feel threatening to them.

An “Indian,” as taught by an unfortunate amount of teachers of young children in America, is a caricature who lives in a teepee, wears a headdress, makes totem poles, and eats buffalo. An almost mythical person from the past who is only now present as some kind of genealogical badge of honor for anyone who may have some Native blood. We all think we know this person. But we don’t.

Because the “Indian” character feels familiar to so many of us, many people who wouldn’t dress their child as any other race for a costume think that it is inoffensive to dress up as a Native American. People think Native Americans exist in the past. They do not want to accept that we are still here, and that our regalia still has meaning or is still worn.

Let me tell you right now that it does, and when you put your child in an “Indian” costume that is comprised of mix and match pieces of different tribes you are telling me, my daughter, my Mother and all the women before me that our existence does not matter.

You are saying that our stories and our truth are secondary to your romanticized colonial fantasy.

You are saying that you support past and present efforts laid down by our government to exterminate and systematically erase an entire group of peoples.

We as parents have a responsibility to not only teach our children at home but to confront the educators and system that perpetuate false history. The short version of this is DO NOT DRESS YOUR CHILD LIKE AN “INDIAN” FOR THANKSGIVING OR ANY OTHER HOLIDAY. Do: allow Native Americans to feel your support. Do listen to our stories. Do understand that we are still here, and deserve representation. Do help us to be seen. And understand that wearing cardboard feathers only helps to obscure us.

More Like This
I’m Getting Dual Citizenship For My Jewish Children, Just In Case.
39 Halloween Trivia Questions & Answers
The Best Halloween Family Pajamas To Match Your Boos
13 Rosh Hashanah Quotes For A Sweet New Year