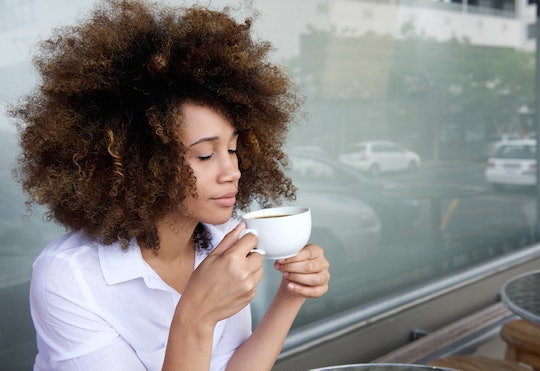 The debate surrounding whether coffee is good for your health has raged on for years, especially where it concerns the heart. Although there have been concerns about the relationship between java consumption and potential stiffening of the arteries, drinking multiple cups of coffee a day won't harm your heart, according to a new study presented at the British Cardiovascular Society conference Monday. What's more? Researchers claim that consuming 25 cups per day is no riskier than indulging in five cups of liquid gold. Yep, it's a fabulous day for coffee lovers.

Back in November 2018, The New York Times published an article titled, "Too Much Caffeine May Stress the Heart." The article explored the link between caffeine consumption and cortisol, the body's main stress hormone, according to WebMD. Coffee can increase cortisol levels, therefore elevating stress levels in the body.

In addition to heart disease, "a constant outpouring of too much cortisol can result in a number of health problems, including anxiety, depression, problems with memory and concentration, trouble sleeping, weight gain," personal health columnist Jane E. Brody wrote.

A 2005 study, however, determined that "cortisol responses to caffeine can be diminished, but not eliminated, when caffeine is consumed daily," according to LiveStrong. Translation: If you're an everyday coffee drinker, the fight or flight response cortisol generates isn't as heightened.

Scientists at Queen Mary University of London explored coffee's possible effects on the heart a bit further, presenting their fascinating findings at the British Cardiovascular Society in London on Monday. The researchers goal was to determine whether everyday coffee drinkers suffer from arterial stiffness, a condition that can lead to cardiovascular disease and stroke, according to Circulation.

Participants underwent MRI heart scans and infrared pulse wave tests, and "measures were corrected for contributing factors like age, gender, ethnicity, smoking status, height, weight, how much alcohol someone drank, what they ate and high blood pressure," according to Queen Mary University of London's website.

After everything was all said and done, the study concluded that "drinking more than three cups of coffee a day did not significantly increase the stiffness of blood vessels compared to people who drink one cup or less a day," Kenneth Fung, who led the data analysis, told CNN.

Although Fung and his team did not include participants who drank more than 25 more cups of coffee a day (sheesh) in the *official* findings, they determined that "those drinking up to 25 cups a day were no more likely to have stiffened arteries than those who drank less than one cup," according to The Telegraph.

Of course, this finding isn't an endorsement from the study's researchers to go HAM with your daily coffee intake.

"We're not telling people to drink 25 cups a day per se. If anything, if you drink within recommended guidelines, then we don't expect to see an increase in arterial stiffness compared with those who drink one cup or less a day," Fung explained, according to The Epoch Times.

Personally, I can't fathom drinking 25 cups of coffee a day (where do these java lovers find the time? And more importantly, when do they sleep?), but it's comforting to hear that indulging in coffee won't hurt your heart. That being said, every body is different and you should consult with a trusted medical professional before deciding what level of coffee intake is best for you.