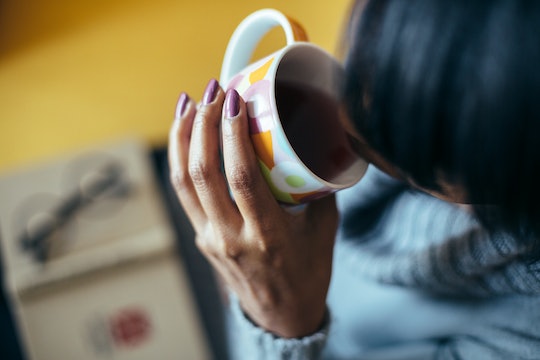 Study Says Your Daily Coffee Habit Has A Surprising Health Benefit, So Pour Yourself Another Cup

We all do things that we know aren't that great for our health, like skip the gym or overdo it at the dessert table at our weekend BBQs. Everyone has their own vices, and for most people — especially busy parents — coffee the hardest thing to give up. Well, a new study suggests that you might not have to. According to new research, drinking four cups of coffee a day appears to come with some surprising health benefits.

The study, published by Judith Haendeler and Joachim Altschmied of Heinrich-Heine-University and the IUF-Leibniz Research Institute for Environmental Medicine in Duesseldorf, Germany in PLOS Biology, found that an amount of caffeine equivalent to four cups of joe can be good for your heart. Apparently, the caffeine pushes p27, an enzyme that normally slows cell division, into the mitochondria of the cell, according to Medical News Today. Once the enzyme is in the cell, it triggers all of these mechanisms that help repair heart muscles, meaning it could help people heal after a heart attack and help with other cardiovascular issues, according to Science Daily. In the study, the effects of caffeine were tested on pre-diabetic, obese mice, and in aged mice, not humans just yet, so there's still some research to sort out.

Haendeler said in a statement, according to Science Daily, accompanying the findings:

Our results indicate a new mode of action for caffeine, one that promotes protection and repair of heart muscle through the action of mitochondrial p27. These results should lead to better strategies for protecting heart muscle from damage, including consideration of coffee consumption or caffeine as an additional dietary factor in the elderly population.

As mentioned, the research was only done using mice, so it's not like you should start serving espresso to cure everything that ails you or a loved on. Professor Tim Chico, Professor of Cardiovascular Medicine and Honorary Consultant Cardiologist, University of Sheffield, who was not involved in the study, told The Independent:

These are very interesting findings but need to be confirmed in clinical trials before we can tell whether caffeine is truly helpful after a heart attack in humans. There is already some evidence suggesting coffee might protect against some diseases, which if true could be due to the effect of caffeine on p27.

He added, “I do not think people need to drink more coffee in response to this study, but that people who already drink coffee can be reassured that it might have health benefits (as long as they don’t use it to wash down an enormous muffin, cake, or doughnut).”

This is not the first study that has shown coffee might have health benefits. A 2017 study found that drinking coffee could lower your risk of death from "all causes," including heart disease, compared with non-coffee consumption. Drinking about three to four cups a day showed the greatest benefit, with the benefits plateauing with any more than that. Drinking more than three to four cups wasn't associated with harm, according to Science Daily, but it stopped being really helpful. Everything sort of levels off.

According to this same study, coffee was also associated with a lower risk of some cancers, as well as type 2 diabetes, gallstones, and gout. It also reduced the risk of liver conditions. So if you're a dedicated coffee drinker who has a couple of cups a day habit, it's definitely not doing you any harm. The same is true for pregnant women. As reported by CNN, a study this year found that 200 mg of caffeine (or two to three cups of coffee) is safe for pregnant women, though any more than that could have adverse effects on the fetus, including weight gain.

Basically, all of these studies confirm what coffee lovers already knew. Coffee is life. So feel free to go brew another pot and enjoy it.