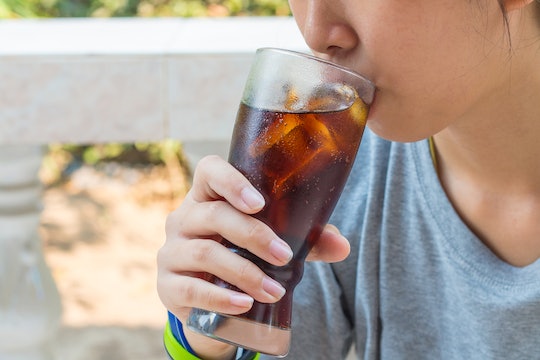 Study: Drinking Too Many Sugary Beverages May Be Linked To Early Death In Women

In the busyness of life, reaching for a sports drink or soda might feel like an insignificant decision. But new research shows that drinking lots of sugary beverages may be linked to premature death from cardiovascular disease and some cancers. Worse, the risk is higher for women, the study suggested.

Nobody wants to think about death. So, forestalling it as long as possible seems like a wise choice, and staying healthy while we age is a big part of that. Conventional wisdom has long linked things like a healthy diet to a longer lifespan, (even if the research sometimes seems contradictory about what exactly makes up a healthy diet.) Now, avoiding sugary drinks like sports drinks, soda, and even juice should be part of that health plan, according to a study published in the journal Circulation.

Researchers used data from studies on 37,716 men and 80,647 women and analyzed how frequently they consumed sugary drinks and their cause of death, according to CNN. Women who drank more than two sugary drinks per day had a 63 percent likelihood of premature death, and for men the risk increased by 29 percent, the research found. The increased consumption seemed linked to conditions like cardiovascular disease, colon cancer, and breast cancer, according to CNBC.

Lead study author Vasanti Malik, from the Department of Nutrition at Harvard T.H. Chan School of Public Health, told CNN, "There's been previous studies that have shown strong and consistent links between the consumption of sweetened beverages and weight gain, Type 2 diabetes, as well as other cardiometabolic conditions such as heart disease and stroke.”

People who consumed more than one sugary drink per month, but less than two per day, experienced what researchers called a dose effect, as Cleveland’s Fox News 8 reported, and the risk increased with the number of drinks.

The study reported that sugary beverages are the “single largest source of added sugar in the U.S. diet. A typical 12-ounce serving of soda contains 140 to 150 calories and 35 to 37.5 grams of sugar.” Malik told CNN that the next step is to examine how exactly sugary beverages connect to cause of death.

Switching to diet beverages seems like the smart choice, but the researchers also cautioned against jumping on that bandwagon too quickly. While drinking one artificially sweetened beverage per day lowered the risk of premature death, according to CNN, drinking four or more still increased the risk from cardiovascular disease. The outlet noted that a study published last month found that drinking two or more diet drinks per day led to increased risk of clot-based strokes, heart attacks, and early death.

A representative for the Calorie Control Council, which works with the low- and reduced-calorie food industry, said observational studies like these aren’t conclusive. “It is likely study subjects were already at a greater risk for these conditions and chose low-calorie sweetened beverages to manage their calorie and sugar intake, as these products are proven safe and beneficial for those managing their weight and blood glucose levels," the representative said, according to Fox News 8.

Studies like this may leave you feeling like there are no good options, but they point to that one thing that science has long been telling us: balance is the key. And, of course, don’t forget that magic elixir that is so important to many aspects of health — there’s always water.