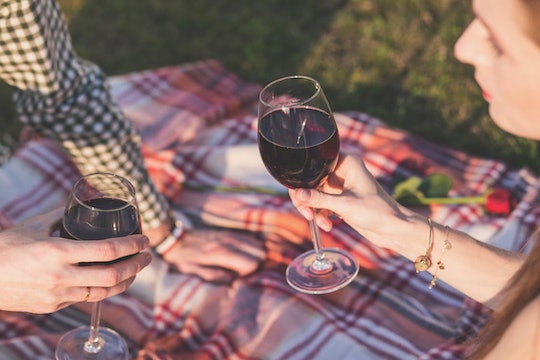 A Weekly Glass Of Red Wine May Boost Your Chances Of Getting Pregnant, New Study Says

Drinking a glass of red wine is a great way to wind down after a very stressful week. There's nothing better than turning on Netflix, uncorking a bottle, putting on sweatpants, and finally being able to relax with a glass of vino. But there might be a new purpose behind drinking a glass of wine than to just wind down — it could possibly help you concieve. A new study found that drinking red wine may increase a woman's chances of getting pregnant, depending on how long you've been trying to conceive.

Having a glass of red wine once a week may improve your chances to get pregnant, according to a new study conducted by Washington University. The research revealed, according to The Telegraph, that women who drank one glass of wine each week had a better "ovarian reserve" or a better quantity of eggs present in their ovaries than women who drank other spirits.

But you won't find the same effect with a glass of white. After observing 135 women during the study, according to The Telegraph, the researchers found that white wine, beer, and spirits did not produce the same results as red wine. Walk, don't run, to grab your favorite bottle of merlot.

This is not the first study to make this claim about wine and pregnancy. One 2003 study found that women who drink wine were able to achieve planned pregnancies faster than other women, waiting less time to begin conceiving and getting pregnant than other alcohol drinkers. But the study was unable to detect whether it was the wine that specifically had any impact on this. Another 2016 study found that drinking a glass of red wine a day could boost your chances of getting pregnant, according to The Sun, due to similar findings with this new study.

As previously stated, the study found that women who drank moderate amounts of red wine (less than 5 glasses a month), according to the Daily Mail, had a higher ovarian reserve. The authors of the study, according to the Daily Mail, were not exactly sure why red wine could boost ovary health, but it could be due to the "anti-inflammatory component resveratrol." Resveratrol is a natural component found in nuts, red wine, and grapes, according to Science Daily, and has anti-inflammatory properties and can successfully address hormone imbalances.

If you're trying to conceive or ever considered getting pregnant, then you are aware that this study is highly conflicting with other reports. The Centers for Disease Control and Prevention warns against drinking while trying to get pregnant, according to Fit Pregnancy. Of course, some women could still be drinking alcohol while they are unknowingly pregnant. According to the CDC, many women do not know that they are pregnant during their first month of pregnancy and therefore run the risk of harming their developing baby. In the United Kingdom, the Royal College of Obstetricians and Gynecologists updated guidelines to state that women who were trying to conceive should avoid drinking alcohol for the same reasons. The bottom line is that there is no safe level of alcohol consumption during pregnancy, according to The Bump.

While these new findings might seem promising, there are some important things to note. The sample size for the study is so small, according to the Daily Mail, that it "doesn't reach statistical significance" and further studies are needed to determine why some types of alcohol give women a higher egg count while other alcohols do not.

It's also important to note that there are other ways of getting resveratrol in your diet other than consuming red wine. While this study presents itself as good news to women who have considered getting pregnant and like to kick back with a glass or two, do consider the risks of drinking while trying to conceive.