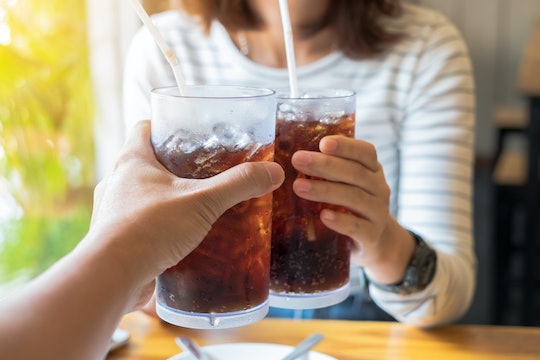 There are already plenty of things that pregnant women are advised to give up to protect the health of their unborn babies — alcohol, sushi, deli meat, soft cheese, caffeine — but it seems that it might be time to add soda to that list. It's no secret that sugar-sweetened drinks aren't exactly the healthiest choice, but new research suggests that drinking sugary drinks in pregnancy can increase your child's asthma risk later on in childhood, and it's just one more good reason to swap your Diet Coke for water. A recent study published in the Annals of the American Thoracic Society found that the likelihood that a child will develop asthma between the ages of 7 and 9 is higher if their mother drank sugary drinks while pregnant, or if the child themselves consumed sugary drinks during early childhood. And given that it's certainly not the first study to suggest that sugar consumption during pregnancy probably isn't a good idea, it seems like there's good reason to give it up — or at least cut back as much as possible.

The study, led by Harvard Medical School researchers Sheryl L. Rifas-Shiman and Dr. Lakiea S. Wright, looked at the food and beverage consumption of 1,068 mother-child pairs, first during the mother's first and second trimester, and again when the child reached 3 years old. Given that sugar-sweetened beverages and high fructose intake is already known to increase the risk of childhood obesity — which, in itself is a risk factor for asthma — it was reasonable to expect that there would be a connection. But what the researchers actually found was that consumption of sugar-sweetened beverages was associated with childhood asthma development, regardless of whether or not the child was also overweight.

What that suggests, according to the study, is that drinking sugary drinks may affect inflammation in the lungs and airway, which is why obesity likely isn't the only risk factor associated with too much fructose consumption. But the amount consumed also made a difference: according to EurekAlert!, mothers who consumed 46 grams of fructose per day had a 61 percent higher chance of having children with asthma than those who consumed 21 grams a day, while 3-year-olds who consumed around 44 grams per day of fructose had a 64 percent higher chance of developing asthma than those who had only 15 grams per day.

The focus on fructose specifically is significant though, because it suggests that it's not enough to simply consider "sugary drinks" to mean soda or sugar-laden fruit drinks. As the researchers noted, fruit and fruit juice is also a natural source of fructose, even though it's considered to be healthy, and while many parents would balk at the idea of letting their 3-year-old drink soda or other sugary drinks, apple juice, for example, often seems like a pretty harmless choice. But the study found that the primary source of fructose consumption in the young children studied was fruit juice, with the children in the highest-risk cohort consuming between 3 and 10 servings of fruit juice a day.

In May, concerns about the effect of fructose on children's health led the American Academy of Pediatrics to revise its recommendations about children's fruit juice consumption, and it now recommends that fruit juice should be avoided entirely at least until children reach their first birthdays. Juice intake should then be limited to 4 ounces maximum between the ages of 1 and 3, while kids between 4-6 should have no more than 6 ounces. And in all cases, parents should avoid giving juice in bottles or sippy cups, as it can increase children's risk of tooth decay.

The effects of fructose also mean that pregnant women will likely want to be mindful of their own fruit juice consumption — and it's also worth noting that it's a much better idea in general to actually eat the fruit itself rather than drinking the juice, according to the AAP, as you'll at least get the added benefit of fiber. But drinks with added sugar, like soda and fruit drinks, are still a big concern: previous research by Rifas-Shiman, published in Pediatrics in July, found that each additional serving of sugar-sweetened drinks pregnant women drank per day translated into their children being about half a pound heavier by the time they reached 8 years old, according to Science News. And moms who drank at least two servings of sugar-sweetened beverages per day during their second trimester were the most likely to have children who were overweight or obese.

There's no need to panic if you drank a lot of orange juice when you were pregnant, or if you had an overwhelming craving for Coke — sugar consumption during pregnancy doesn't mean your child is doomed to have asthma or that they will automatically become obese. But the findings are valuable when it comes to offering nutrition recommendations for both pregnant women and young children. And if nothing else, the research really just seems to back up the conventional wisdom that, really, water will probably always be the best choice when it comes to choosing what to drink.