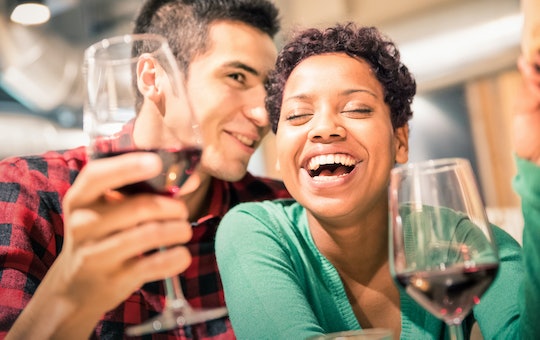 Cheers! Drinking This Much Wine Each Day Could Help You Live Past 90, New Study Claims

Let's be honest. After a long day dealing with headaches at work or corralling kids around, a glass of a red wine or a frosty beer can really take the edge off. And as it turns out, according to a new study, cracking open a cold one or pouring yourself a glass of vino may actually be good for your health. In fact, drinking a certain amount of alcohol per day could very well help you live past 90 years old, as this new research suggests. Cheers to that, right?

A study conducted by the Clinic for Aging Research and Education in Laguna Woods, California found that alcohol actually played a role in how long its participants lived. Researchers analyzed data from over 1,600 elderly participants — starting the study more than a decade ago in 2003 — and discovered that those who drank alcohol on a regular basis tended to live longer than those who didn't. But, that isn't to say that you should go on a bender every night in an attempt to live longer than your friends. That's certainly not what the study is suggesting.

Rather, the participants who lived longer didn't drink that much, they regularly indulged in a moderate amount of wine or beer. Think of it like Goldilocks. Not too much, not too little. But just right.

The researchers concluded, according to U.S. News & World Report, that people who drank two glasses of beer or wine a day "improved their odds of living longer than those who abstained by about 18 percent."

Here's what you need to take note of: The study didn't find that participants who went out and drank hard alcohol, like scotch or gin, lived longer. But it was those who had a couple of glasses of wine with dinner or some beers at the bar who outlived those who didn't. So bourbon drinkers, these results don't seem to apply to you.

When lead study author study Claudia Kawas presented her findings at the American Association for the Advancement of Science's yearly conference, which was held in Austin, Texas, this year, she expressed just how surprising these results were. Per U.S. News & World Report, Kawas said:

I have no explanation for it, but I do firmly believe that modest drinking improves longevity.

The key word here is modest drinking. Not excessive — modest. Even so, though, these results are certainly surprising, because alcohol really isn't the best thing you can feed your body. It makes you dehydrated and disoriented, and can become a life-threatening addiction. But studies like this one and information from the Mayo Clinic suggest that alcohol in moderation comes with certain health benefits. In addition to possibly adding a few extra years to your life, the Mayo Clinic notes that moderate alcohol consumption could also possibly reduce your risk of developing and dying from heart disease, lower your risk of ischemic stroke, as well as diabetes.

Now this new research — named "The 90+ Study" — is adding a new, interesting dimension to this existing research. The key thing to take away, though, is that moderation is key, which is a good motto to live by. Whether it be wine or cake, having a little bit isn't bad, and could actually be good for you, as long as you don't get carried away.

I don't know about you, but I'm definitely having a glass of wine with my dinner tonight. Cheers!

More Like This
14 Recipes For Sick Kids When Everyone's Tired Of Canned Soup & Crackers
What Foods Fight Nausea During Pregnancy?
Is Raspberry Leaf Tea Safe To Drink During Pregnancy?
Mama Mia! Ronzoni Announces Beloved Pastina Is Discontinued & The Internet's Lost It
What Parents Are Talking About — Delivered Straight To Your Inbox