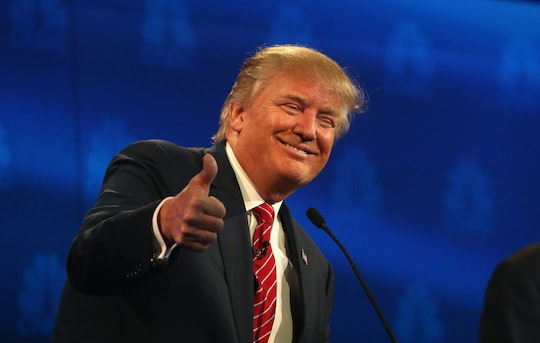 Drunk Uncle On 'SNL' Is A Donald Trump Supporter, Offering An Entirely Unflattering View Of The Candidate's Fans

If nothing else, Drunk Uncle, the "Weekend Update" regular on SNL, provides pretty much never-ending comedic value in any line he quite literally spits out. But on tonight's SNL, hosted by Donald Trump, Drunk Uncle came out as an avid Trump supporter, which wasn't the best thing for the presidential hopeful, I must say. If you don't know anything about Drunk Uncle, allow me to introduce you: Drunk Uncle is, well, your drunk uncle. You know, the one who isn't shy about talking about pretty much whatever at any and all family events? It includes, of course, politics, your latest, last, and current pregnancy, your sex life, and any and all hot button issues.

When he showed up on the "Weekend Update" tonight (watch video of his appearance on NBC here), he covered everything as a Trump's "number one fan," which is just as horrible as you'd expect it to be, and nothing was off limits. Drunk Uncle let it all hang out, from racist comments to transphobic lines that just leave permanently bad taste in your mouth. Drunk Uncle doesn't exactly hold back. Honestly, it really makes you wonder why Trump is even welcome on SNL at all if this is the image we get to see of his supporters. Some of Drunk Uncle's "best" lines might've been funny, but they pretty much paint an all-inclusive picture of everything that's wrong with Trump's campaign.

Here's what he said, and exactly how the internet reacted.

They Have A Lot In Common

We both have like, a million things in common. You know? We both love White Russians.

They're Concerned With Being PC

All they care about is: 'Can I eat my flax seeds on my hoverboard?'

Is this Apple Watch gender neutral?

Her name is Bruce!

They Both Really Believe In Whatever They're Saying

I don't just like him, Collin. I love him. He's gonna make America great again!

He's my president, Colin, because he's finally going to ged rid of all the... every single one of them!