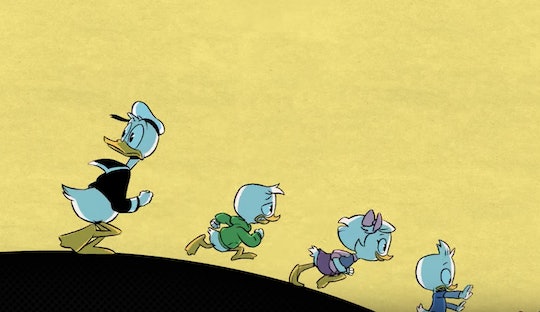 Buckle up for some classic hijinks featuring Daisy Duck, Goofy, and more of your favorite Disney cartoon characters because DuckTales Season 3 is premiering soon with two brand new episodes. So just go on and clear your schedules for Saturday, April 4 now.

For those who aren't familiar with the hilarious animated Disney show with one very catchy theme song, here's a brief refresher. The comedy-adventure series focuses on Scrooge McDuck, the most famous trillionaire in Duckburg; his triplet grandnephews, Huey, Dewey, and Louie; his nephew, Donald Duck; and the crew that makes up the McDuck Manor team. In this new season, the Duck family will embark on a "globetrotting hunt for the world's greatest lost artifacts" but a secret organization from Scrooge's past, the Fiendish Organization for World Larceny (aptly titled F.O.W.L.) will try to stop them at any cost.

Kids — and parents too, let's be real — can look forward to watching the two brand new episodes of DuckTales on April 4 at 9:30 a.m. when they premiere on Disney XD and on DisneyNow.

In the meantime, you can watch Season 2 of DuckTales or some of the many DuckTales shorts on DisneyNow. You can also stream episodes of the original animated DuckTales series from 1988, Disney's DuckTales, on Disney+ in addition to streaming all two seasons of the modern remake.