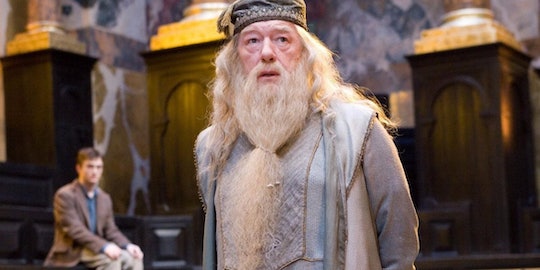 Let me just say this: I love Harry Potter. I’m a Harry Potter fan first and a human being second. But the latest piece of Fantastic Beasts news is, well, a blow. Director David Yates said in an Entertainment Weekly interview that Dumbledore’s sexuality won’t exactly be a hot topic in the Fantastic Beasts sequel. I’m disappointed, along with all the other Potterheads. Yates seems to be laboring under the assumption that it’s OK to keep Dumbledore’s sexual orientation on the down-low because everybody already knows about it. He seems to think what we want is confirmation of Dumbledore’s gayness when what we actually want — nay, what we deserve! — is representation. Not the kind that’s alluded to, not the kind that relies on subtext, but true representation in the form of a powerful wizard and one of the most complicated and nuanced characters of all time who also happens to be wonderfully and unapologetically gay.

Yates seems to think that it doesn't matter, per his Entertainment Weekly interview:

“Not explicitly,” Yates replied when asked if the film makes it clear that Dumbledore is gay. “But I think all the fans are aware of that. He had a very intense relationship with Grindelwald when they were young men. They fell in love with each other’s ideas, and ideology and each other.”

This is a letdown for a couple of reasons — namely because Dumbledore is the only canonically gay character in seven whole books (which J.K. Rowling retroactively revealed in 2007 after the series had already concluded), and his sexuality barely merits a footnote.

There are indeed people who support cutting the details of Dumbledore’s love life out of the films. They seem to believe “there’s no place for that here,” which is certainly An Argument. Unfortunately for those people, the numbers don't support this. There was a place for Harry and Ginny, for Ron and Hermione, for Lupin and Tonks, for Snape and Lily, and for virtually every other couple over the course of the series, so I feel like there’s definitely room for (at the very least) one or two throwaway comments about how Dumbledore once had a thing for the main villain and how this affects the plot. This means something to fans, to kids reading the books for the first time, to parents.

By the way, can you imagine if Grindelwald had been a woman and Dumbledore was straight? We wouldn’t be able to stop hearing about how they dated once and might date again at some point in the future! The sexual tension would be palpable! They’d be front and center on all the posters, looking wistfully into each other’s eyes! Newt Scamander who?

It’s exhausting to anticipate proper LGBT+ representation only to be let down. It’s exhausting to watch people with a platform and good intentions choose to throw it all away. It's exhausting to think, "Well, maybe next time." After all, it was Dumbledore who told us we’d all have to make the choice between what is right and what is easy.

Quite apart from everything else, it’s just a better story if you DON’T ignore Dumbledore’s feelings for Grindelwald. In fact, Dumbledore being in love with him is the only thing that really makes sense. Despite the fact that Grindelwald was murdering people left and right in his ruthless quest for power, we know from Harry Potter and then Deathly Hallows that Dumbledore didn’t confront the guy for almost 50 years. Why? Because they were just super good platonic friends? Because Dumbledore was afraid to find out who really killed his sister Ariana during that fateful duel? I don’t buy it. Not entirely. Sure, the thing about Ariana could be true, but that doesn’t mean Dumbledore wasn’t also reluctant to finally face off with (and possibly be forced to kill) the first man he ever loved. And while it’s not clear whether Grindelwald returned the interest, I think it’s possible Grindelwald knew, and I wouldn’t put it past him to use that knowledge to his advantage as a last resort during the final showdown, forcing Dumbledore to choose between the fate of the wizarding world, and a life with the man he loves. Honestly, this movie writes itself.

But this movie didn’t need to write itself; J.K. Rowling wrote it. And while I’d like to reserve judgment until I’ve actually watched the film, I can’t say this recent development doesn’t have me worried. Do I still have hope? Of course I do. This is only the second movie in a five-part franchise, so there’s plenty of time to expand on Dumbledore’s backstory satisfactorily. But sometimes it feels like having hope is exhausting. It’s exhausting to anticipate proper LGBT+ representation only to be let down. It’s exhausting to watch people with a platform and good intentions choose to throw it all away. It's exhausting to think, "Well, maybe next time."

After all, it was Dumbledore who told us we’d all have to make the choice between what is right and what is easy. And I sincerely hope J.K. Rowling and David Yates don’t choose to disregard Dumbledore’s sexuality just because it’s easier.