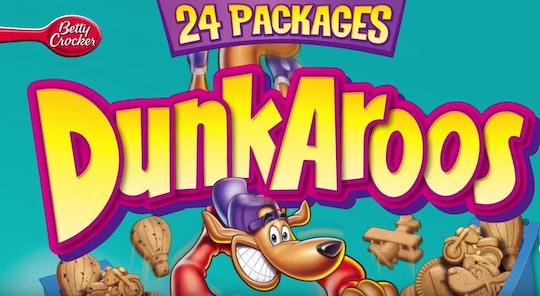 Get Ready To Get Your Dunk On Because Dunkaroos Are Coming Back, Baby!

Scrunchies are all the rage again. Practically all of our favorite 90s TV shows are getting rebooted. Heck, even mom jeans are back in style now. And now your nostalgia is going to really kick in because Dunkaroos are coming back soon — so get ready to get your dunk on.

On Feb. 3, the official Dunkaroos Twitter and Instagram accounts shared a video clip that instantly made everyone's Monday a whole lot better. The video featured popular 90s fads, with text overlay that read, "Frosted tips? Totally not coming back. Cassette tapes? Definitely not coming back. '90s fashion? Probably coming back." It was the last item on the list however, that made everyone jump for joy.

"Dunkaroos. Definitely coming back. Summer 2020." WHAT?! Is this for real?

Naturally, folks on Twitter promptly lost all cool it previously had — and millennials in particular, rejoiced at the news. Plenty of freak-out GIFs ensued too, including one from Dunkaroos itself featuring Michael from The Office exclaiming, "Oh my god! OK, it's happening!"

One Twitter user declared, "BEST. SUMMER. EVERRRRRRRRRRRRR." Another person commented, "OMG! I’ve waited so long you don’t even know!!!" Yet another Twitter user chimed in with, "I will be camping out at my grocery store in anticipation of the release. Actually wait do you have pre-order? I’ll be doing that. LOVE YOU."

Although General Mills stopped Dunkaroos production in the U.S. in 2012, up until this point, nostalgic millennials could still get their hands on some of the delicious snacks via Amazon, Buffalo Sponge Candy, and "smuggling" them from Canada. (If they were willing to pay the steep price, that is.)

In 2018, however, Dunkaroos were also discontinued in Canada, but word has it they can still be found in Australia, according to Mashed. The reason for Dunkaroos' disappearance? A steady decline in popularity, likely stemming at least in part to the utter unhealthiness of the frosting/cookie combination, Mashed reported.

Thankfully, that will all be changing in the U.S. come summer 2020 when millennials will once again be able to achieve a Dunkaroos-induced sugar rush. General Mills hasn't released an exact re-launch date — but one thing's for sure: With Dunkaroos making a comeback, summer 2020 is already shaping up to be a dunking good time.