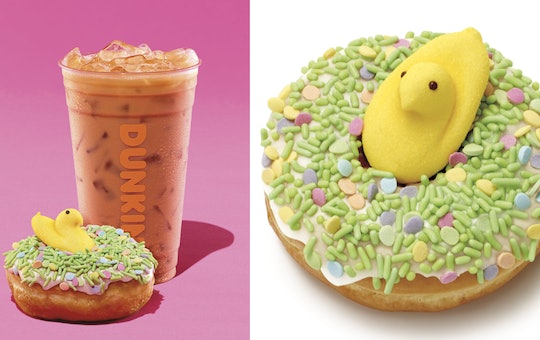 After a long, long winter, spring is finally here. Although it may not feel like it in certain parts of the country right now, there are at least some ways to make it feel like spring has sprung. In fact, trying out Dunkin's Peeps-flavored coffee and donut, which are only available for a limited time, is an excellent place to start.

Now that the weather is finally starting to warm up again, there's nothing better than sipping on an iced coffee. But what can make that iced coffee even better? Adding a very seasonal flavor, of course. And thanks to Dunkin', that's now possible with its Peeps-flavored coffee and donut.

Starting on April 1 (that's next Monday, just FYI), everyone can get Peeps flavoring in any of their favorite drinks at Dunkin'. Yes, that means hot, iced, or even frozen coffee and in any of the coffee chain's espresso drinks or frozen chocolates. And it tastes just as good as it sounds — the flavoring adds the classic, creamy, super sweet marshmallow taste to Dunkin's already incredible coffee drinks, as Delish explained.

To make things even sweeter, Dunkin' will also be offering a Peeps donut for a limited time. The cute donut features a green and egg shaped sprinkle mix, topped with the classic yellow marshmallow Peep. Just look how cute!

And check out how refreshing and sweet that Dunkin' iced coffee looks...

But these cute, festive items won't be around forever; as People reported, they'll only be around while supplies last. So for those who are very interested in trying out these marshmallow confectionaries drinks and goodies, you should run to Dunkin' ASAP next week before the items become harder to find than Easter eggs in your family's super competitive egg hunt.

And if Peeps aren't your jam, there's still good news for Dunkin' fans. This spring. Dunkin' has also introduced chocolate cherry cold brew to the menu, as well as some new lemonade drinks and a sweet Sriracha bacon breakfast sandwich.

Needless to say, people are pumped for Dunkin's new items.

By now, Peeps have pretty much become synonymous with spring time. Really, there's no other candy more prominent in Easter baskets than Peeps, the marshmallow cuties covered in colorful sugar and molded into chicks or bunny rabbits. Indeed, Peeps are so popular, they've been the bestselling (non-chocolate) brand at Easter for more than 20 years, according to Just Born.

And this year, of course, Peeps are taking over grocery stores in a slew of ways. For instance, Kellogg's released a limited edition Peeps cereal in January, according to People, which is meant to mimic the classic taste of the marshmallows. And that same month, International Delight released a Peeps-yellow colored coffee creamer meant to add some marshmallow sweetness and color into any cup of coffee at home.

Since Peeps are only sold once a year for a limited time, people should want to get their hands on as many Peeps-flavored items as they can. Luckily, this year, it shouldn't be too hard.

More Like This
A New 'Golden Girls' Themed Restaurant Is Happening!
10 Dreamy Summer Popsicles To Indulge In Stat
Teachers Reveal The Go-To Movies They Love To Show In School & Why
Mindy Kaling Has The Chillest Response To Rumors That B.J. Novak Is Her Kids' Father