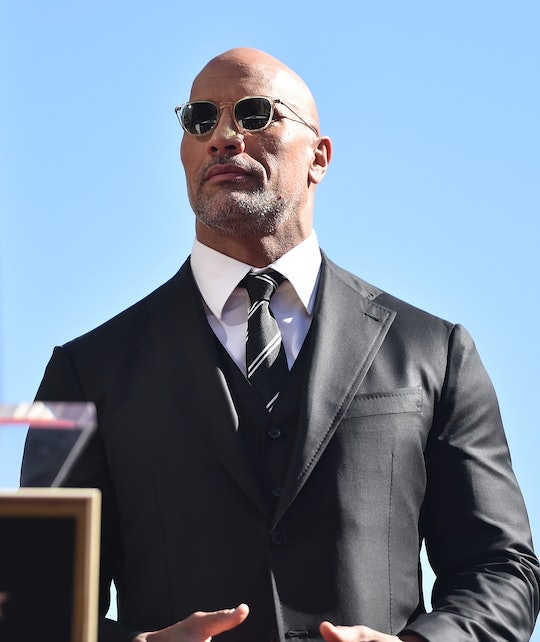 For anyone who’s battled depression, hearing other people share their experiences overcoming it can be both supportive and healing. Now one of the nation’s most famous leading men is telling his story as Dwayne Johnson opened up about his battle with depression. It’s an important step forward for one of the world’s strongest men — literally — to open up about a time when he felt lost and vulnerable, and his openness is so refreshing to hear.

The Rock spoke to British newspaper the Daily Express and shared how his mother, when he was just 15 years old, tried to commit suicide after they lost their apartment. He revealed that she got out of a moving car and tried to walk into oncoming traffic, “I grabbed her and pulled her back on the gravel shoulder of the road,” Johnson told the Daily Express. He previously shared the story on Instagram in February during filming for his show Ballers. At that time he didn't relate it to a subsequent bout of depression.

The experience with his mother pitched him into a dark place and a period of depression. Then, a few years later, he revealed he was released from his contract with the Canadian Football League. His girlfriend broke up with him soon after and he found himself battling depression again, according to the Daily Express. “That was my absolute worst time,” the former wrestler turned actor told the publication.

His comments have garnered a lot of support on Twitter which should serve as a reminder that people are often more understanding than we expect them to be. One user thanked him for his transparency:

The Rock replied, encouraging the user to get help and talk to people, noting that men are often more reticent to reach out.

Another user shared that they've been in treatment for several months and don't regret the choice. They thanked Johnson for his role in helping fight the stigma.

One user pointed out that it’s not just men who struggle to let themselves be seen, explaining that we all have that fear of showing our weaknesses.

Parents might feel like sometimes they have to put on their bravest face not only for their children, but for those around them. As parents, they don’t want to admit weakness or seem like they don’t have it all together. That can make battling through things like depression, anxiety, or mental illness all the more difficult as we hold in our pain alongside feelings of shame or imperfection. “I am not lazy,” one mother wrote in an article about mental health and parenting on The Mighty. “There are reasons why my house is not in order. Some days it takes all I have in me just to get out of bed. Ask me questions.” Another commented, “It doesn’t make me a bad parent to ask for help.”

Celebrities like The Rock certainly seem to be able to relate to some of those same pressures and his openness to talk about it now will hopefully help others seek the help the need, just as he did. "Took me a long time to realize it but the key is to not be afraid to open up," Johnson wrote in a tweet on Monday.

This kind of sharing, from celebrities and all of us, is so important in the fight against mental health stigma. It serves as an important reminder that you're not alone and it's nothing to be ashamed of.