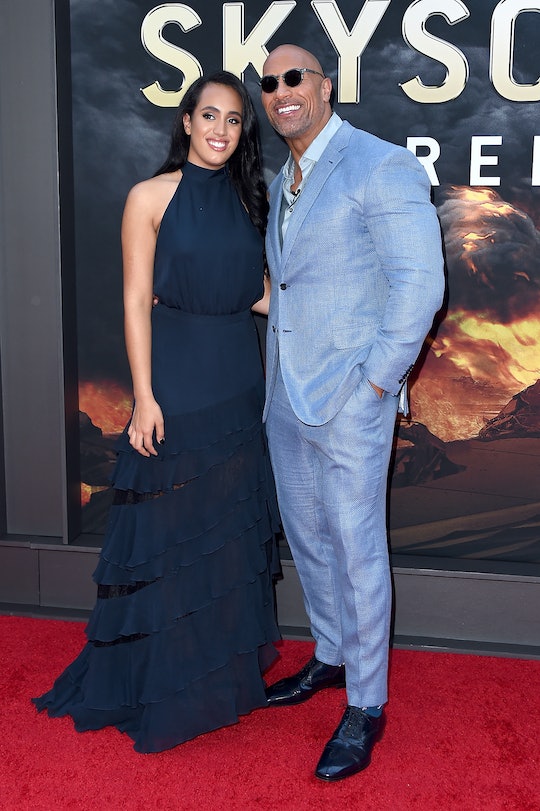 Dwayne Johnson's Photo Of His Newly-Graduated Daughter Is Too Sweet

It's graduation season! As the school year wraps up and June draws near, seniors from across the nation will be donning their caps and gowns and embarking on the next chapter of their lives. It's simultaneously a time of reflection, new beginnings, and all the feelings. For parents watching their babies receive their diplomas, the emotions can be particularly rough to grapple with. And Dwayne Johnson's photo with his daughter who just graduated is the sweetest thing.

In case you've lost track, Dwayne "The Rock" Johnson is a father of three daughters: Simone Johnson, 17, whom he shares with his ex Dany Garcia; Jasmine, 3, and Tiana, 13 months, whom he shares with his current girlfriend Lauren Hashian. And it looks like in addition to the titles "Golden Globes Ambassador" and "model," Simone is officially a high school graduate.

The Rock took to Instagram on Friday, May 24 to share a couple of photos from Simone's big day. In the first shot, the actor and his graduate are smiling at NSU University School in Fort Lauderdale, Florida, according to People. And in the second photo, the proud papa is attempting (and failing) to plant a kiss on his daughter's head "And then your babies graduate," he captioned the post. "Very proud of my first daughter graduating high school, kickin’ *ss and is now NYU bound. I love you and one day you’ll stop pulling away from my beastly arms & kisses 😘🦍."

Meanwhile, Simone commented, "Love you 🖤 thank you for coming."

Almost as sweet as Johnson introducing his daughter as the first-ever Golden Globes Ambassador during this year's awards show. "As part of the 75th anniversary of the Golden Globes, the HFPA is creating a new honor, Golden Globe Ambassador, with an expanding role that embodies the HFPA's year-round philanthropic efforts," the actor said onstage in January 2018. "Throughout my personal and professional life, I am surrounded by brilliant and strong women. Ladies and gentlemen, I am thrilled to introduce the first-ever ambassador — my 16-year-old daughter, Simone Garcia Johnson. Simone, I am so incredibly proud of you." Cue: Awwwww.

As Johnson mentioned via Instagram, his daughter will be attending NYU in the fall. However, she apparently has an interest in WWE as well — just like her famous father. (According to The Bleacher Report, Simone has already started training at the WWE Performance Center in Orlando.) “She does, she’s very interested in it. She has a great passion about it,” The Rock told Stephen Colbert in July 2018, according to ET Online. “I love it. I love the idea of her doing it, only because the wrestling business these days is a lot different than I was there.”

Can I just say that I love Dwayne Johnson as a dad? The relationships his has with his three daughters are just too sweet. I can imagine, though, that watching Simone graduate must have been so surreal for the actor. And I have a feeling he's going to be hugging his younger daughters extra tight now. Because before he knows it, Jasmine and Tiana will be the ones wearing that cap and gown..