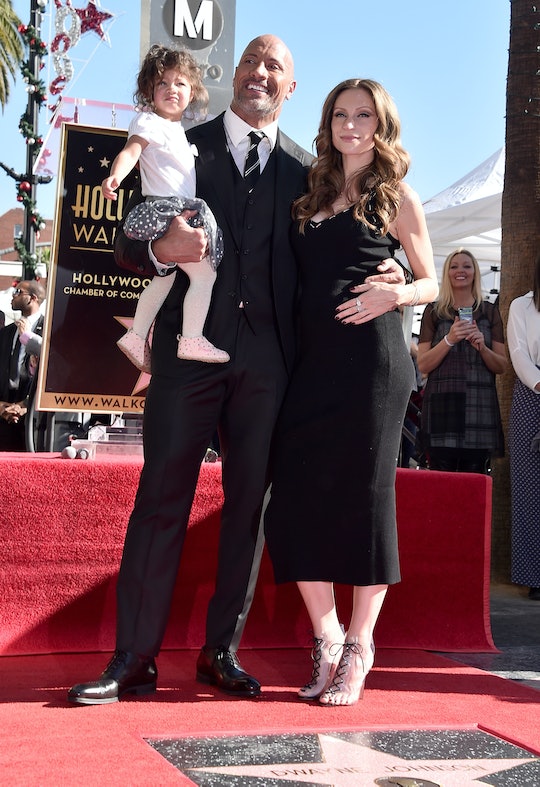 Even though breastfeeding can be a lovely and special bonding experienced between a parent and their baby, it can also feel incredibly demanding. But since breastfeeding isn't always a parenting duty that can be shared between couples, some partners might not always feel like there's much they can do to help out. In a photo posted to Instagram Sunday though, Dwayne "The Rock" Johnson fed Lauren Hashian while she breastfed their baby, and honestly, the sweet photo is total dad goals. Because while he may not be able to step in on her behalf, he can still ensure she's taken care of. And, as all nursing parents will tell you, that will make her life so much easier.

In the post, Johnson can be seen kneeling in front of the couch where Hashian is sitting nursing their daughter, Tiana, while feeding her a meal. In the caption, he wrote, "Mama @laurenhashianofficial has her hands full nursing/feeding Baby Tia, so I’m feedin’ mama her dinner," and added that it was "[his] pleasure" to do it. Johnson also gave a shout out to Hashian "and all [the] mamas out there holding it down and running things," and unsurprisingly, the photo was a huge hit, earning the star tons of praise from his followers.

Johnson became a dad for the third time in April, when Hashian gave birth to Tiana, their second daughter together (their first, Jasmine, is 2 years old, according to Us Weekly, while Johnson also has a 16-year-old daughter, Simone, from his first marriage). But Sunday's Instagram post is far from being the first hint we've had that he's a seriously-devoted husband and father: in a post announcing Tiana's birth, Johnson shared a photo of himself holding Tiana skin-to-skin, and gushed about "the new level of love, respect and admiration" he had for his wife "and all mamas and women out there," after witnessing his daughter's birth.

The former wrestling star also urged his male followers not to miss out on watching their babies being born, explaining that it would be "the single most powerful and primal moment life will ever offer," and one that would give them "boundless" respect and admiration for women "forever."

On Mother's Day earlier this year, Johnson once again took the opportunity to post a tribute to his partner, posting a photo of Hashian with their two daughters, and gushing that he was "in constant respect and grateful awe of all the things this incredible mama accomplishes on a daily basis." He also wrote that she was "an amazing mama" and that "amazing [mamas] make this world go around."

In other words, Johnson is clearly majorly dedicated to his family and has enormous respect for Hashian, which is beautiful to see. But Sunday's post proved that it's not just something he likes to talk about on social media — it's also something he lives on a daily basis. After all, the difficult truth for busy moms of young children is that they are often so busy caring for others that their own needs get ignored — including being able to actually take the time to eat a proper meal. So while he may not be able to replace her in the breastfeeding department, he can at least make sure she gets fed, which lets her know that he is on her side, and that they're totally in this together.

In the comments section, many users praised Johnson for his devotion to Hashian and their daughters, writing comments like, "What a mighty good man," and "good husband and dad skills there!!" with one even calling the pic "new dad inspiration" (totally agree). And while there were also some semi-salty comments about Johnson's photo making it harder for the rest of the men in the world, there were also a number of users who wrote that the photo reminded them of their own husbands and partners, who cared for them in a similar way while they were new moms. One wrote, "It’s what you need to do. I remember my husband doing this for me," while another tagged her partner and wrote, "this reminds me of you."

As much as the bulk of the comments focused on how great Johnson obviously is to be so focused on being there for Hashian and their girls in any way possible, what seems most important about the picture though is that it's a perfect example to men everywhere that not only can they be involved and supportive, even with things like breastfeeding, but that they can still be totally badass and masculine and super proud, nurturing caregivers. These days, dads seem to be embracing that perhaps more than ever, but if anyone ever needed proof that there's nothing more attractive than a man who has no hesitations about getting down on his knees to feed his wife in order to ease the burden of exclusively breastfeeding an infant, all they would need to do is look at this post.

All in all, Johnson's post sets an amazing example for men about what a loving, nurturing partner and father really looks like. And while he hopefully isn't too unique for caring for his family this way — ideally all men would be as loving as he is in that photo — it's also a good reminder to dads and dads-to-be that, if that photo surprises them, it might be a sign they need to step up their game.