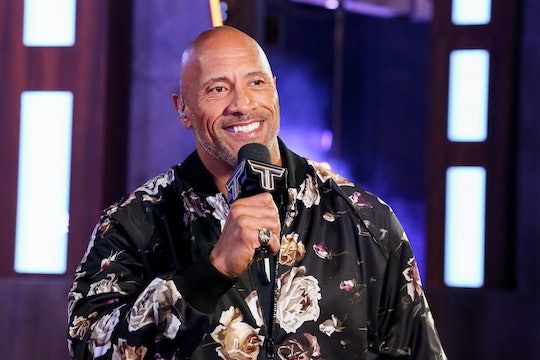 Celebrities sharing heartfelt connections with their fans is always special, especially when it concerns young children. This sentiment was on full display Monday when Dwayne "The Rock" Johnson sang a Moana song to a 3-year-old fan with cancer. As Johnson outlined in his video message, the young boy watches Moana 10 times a day because the movie helps him feel "strong." And yes, I'm already crying.

There are a handful of celebrities out there who regularly lend their support to people dealing with difficult health conditions, like Ryan Reynolds, to name one example. He's at the top of my list because he often surprises children with life-threatening illnesses as his Deadpool character, and he had developed a longterm friendship with Marvel superfan Connor McGrath, who died from cancer in April 2016 at age 13.

Similarly to Reynolds, Johnson also takes time out of his busy schedule to uplift fans who need it most, like a 3-year-old boy named Hyrum Harris. As the actor revealed in his post, Harris was "diagnosed with acute lymphoblastic leukemia which is complicated by Down Syndrome," and he's currently in the "fight for his life." And although this is a tough situation, to say the least, Hyrum is turning to a positive source for motivation — Moana.

"[He is] doing his best to stay strong - by watching MOANA up to 10xs a day because the character he loves, MAUI makes him feel strong," Johnson captioned the video. "According to Hyrum’s mama, his most important thing to say now is, I STRONG. Yes you are big man. Yes you are."

Johnson ended the caption with words of encouragement for Hyrum, writing, "Hyrum, I know I’m a complete stranger to you - who sounds a lot like your hero, MAUI (only with a very large head), but myself along with millions of other strangers who will watch this video are sending you so much love, strength and mana your way. I STRONG. Love, the Rock aka the dude who sounds a lot like Maui."

As for the video, Johnson embodies his Maui character to deliver a few bars from the "You're Welcome" song written by Lin-Manuel Miranda, Opetaia Foa’i, and Mark Mancina.

"What's the lesson? What is the takeaway?/Don't mess with Maui when he's on the breakaway," Johnson sings. "And the tapestry here in my skin is a map of the victories I win/Look where I've been, I make everything happen/Look at that mean mini Maui just tippity tapping."

“I know you’re like, ‘Dude, leave the cool singing to Maui,'" he joked at the end of his rendition.

Johnson's act of kindness was greatly appreciated by Hyrum, who was delighted to be singled out by"Maui." Hyrum's mom, April Harris, shared with People, “Every time Dwayne mentioned Hyrum’s name, Hyrum pointed to his chest and in his soft sweet voice repeated saying, ‘Hyrum,’ as though he knew this was special for him."

"When he began to sing, Hyrum’s eyes got very wide," she added.

As this video proves, a seemingly small gesture can go a long way. And here's to the adorable Hyrum, who is strong just like Johnson's Moana character, Maui.