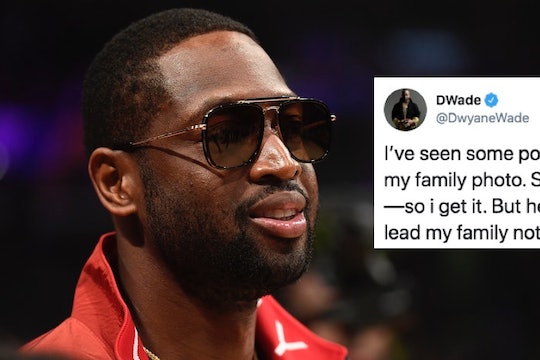 Along with sinking free throws, retired NBA star Dwayne Wade is also known for fiercely supporting and defending his family. On Twitter this past weekend, in fact, Wade addressed criticism about his son's fake nails and his message elicited loads of support from parents and fans alike.

Wade's wife, Gabrielle Union, posted a sweet group shot of their happy family in honor of Thanksgiving. In the photo, Wade and Union can be seen standing alongside their 1-year-old daughter, Kaavia James, and Wade's second-youngest child, Zion Malachi Airamis. Airamis is dressed in a crop top with his long-nailed hand resting on his dad's shoulder. And, perhaps unsurprisingly, the trolls of Instagram had a few not-so-nice things to say about it a lovely family photo.

While I'm not going to give a platform to such hate, their mean comments are on Union's post for all to see. And rather than let the comments go unaddressed, Wade took to Twitter to voice his support for his son and all of his self expressions.

“I’ve seen some post-thanksgiving hate on social about my family photo," he tweeted. "Stupidity is apart of this world we live in — so I get it. But here’s the thing — I’ve been chosen to lead my family not y’all. So we will continue to be us and support each other with pride, love & a smile!”

A few of his followers took note of Wade's support and commented on the power of it. "Thank you for leading with love and being proud to show it," one fan wrote. "Just your example can have ripple effects and benefit more families in our community by helping parents build build better, less damaging, and more loving relationships with their children."

“Idk if @DwyaneWade & @itsgabrielleu know how POWERFUL & MOVING it is that they’re embracing their son’s individuality. (Damnit I’m crying) In our community, being given autonomy over your body, beliefs, image, & statements as a child isn’t a thing. That child is free & happy,” said another. And Wade actually took the time to respond to this tweet, saying, “As a parent my only goal is that my kids feel that I see them, love them and support them." And to another response about how he was “setting the example of a Black father loving and accepting their children as they are,” Wade replied with a 100 emoji.

Supporting individuality in adolescence is an important part of parenting. According to Psychology Today, when children approach the teen years, they begin to forge their own paths in two ways — through independence and individuality. And while it's natural for parents to try to "fit their 'round' adolescent into the 'square' parental hole," as Psychology Today explained, responding with love and acceptance is the in the best interest of your child.

Wade and Union have done a bang up job of this so far. Along with responding to criticism on social media, the entire family supported Airamis back in April when he attended the 11th annual Miami Beach Pride parade, as BuzzFeed News reported at the time. Union shared photos of the family to her Instagram Story, showing all of them dressed in colorful clothes. One photo of Airamis depicted him holding up a rainbow flag and heart with older brother Zaire Wade; Wade captioned the shot, “It’s a family thing." And Zaire shared the same photos to his own Story, captioning them “Love you lil bro no matter what,” and, “Gotcha back kid / Support gang!”

It's not always easy to know what to say when your family comes under fire. But supporting your children and make that support known is never a bad place to start.