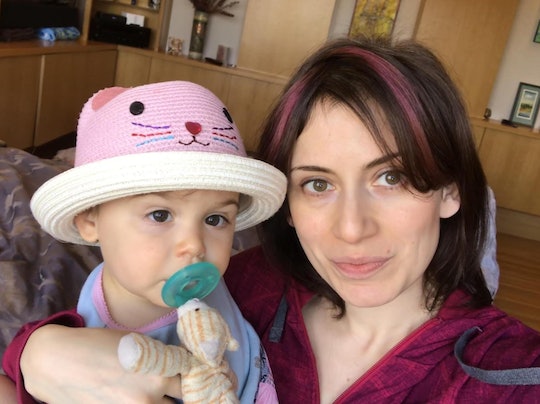 Recently, after I stopped breastfeeding my second daughter and desperately wanted to return to a modicum of giving-a-damn, I pulled my hair out of its permanent ponytail and got a cheap cut — unfortunately, it turned out like a typical mom bob. I can’t really blame the stylist — my hair is a challenge and no haircut could express what was going on inside of me… I needed a tattoo for that. Like a whole sleeve.

There is power in a hairstyle. Katy Perry explained her bleached pixie as a way to bridge the gap between what she looked like and who she really was, telling Dr. Siri Singh in a streamed podcase, "I really want to be my authentic self 100 percent. It hurts when I don't feel like I can."

As my cool (and, this time, very not cheap) stylist held an array of gorgeous swatches before me, I felt like a kid in a candy store. I was especially drawn to the acid colors trend, more in-your-face and bolder than the pastels that were the funky go-to in recent years. Makes sense, I guess, as I, too, am bolder than I have been in quite a while. Aren’t many of us fourth-wave feminist mamas? Edgier. More raw, honest — rude, even. We give more and less f*cks at the same time (well, if you’re like me, it’s way less literal f*cks, cause babies). It isn't about being beautiful anymore; it's about feeling like yourself. And for me, that meant going bright pink.

Hair has always mattered to me. When I was a little girl — roughly the same age as my “threenager” — I desperately yearned for pigtails. Or for one of those giant bows that taunted me from the heads of other gals in my daycare center. The thing is, there just wasn’t enough hair for my mom to gather in order to fulfill my fantasies. There was never enough of anything, for that matter — not in the Soviet Union. But, eventually, we immigrated to the U.S., where my hair flourished with the sheen of the great American dream.

By high school, I’d blossomed despite my wispy hair, and by that I mean I learned a trick or two (or, simply, conformed?): I changed my name, my clothes; shaved my legs, bleached the ‘stache. And then my first boyfriend fell for my best friend and shattered my newly minted sense of self. My reaction was cliché — I chopped off my hair — but the result was revolutionary. At 16, my pixie cut took me to another level: stylish, smart… my aspirational version. For the first time, I realized that even my hair could be a friend, not foe.

But my hair sucks. It doesn’t grow well, biotin, special shampoos, lotions and potions be damned. It’s thin, wispy, and forgettable. When I do grow it out, I get that Eastern European mullet look, which — being Eastern European and spending the bulk of my childhood vying to be American — is like a slap in the face… And don’t even get me started on the stringy bunches of hair that carpet my floors post-babies.

The search for authenticity is a complicated, maybe even a life-long, one. For me, my twenties was when I veered off the map, and my hair echoed that confusion. I had lost my self-respect, a couple relationships, my beloved uncle… control of my car and my life path. My behavior became erratic, yet stilted. And my hair vacillated between an auburn and brassy orange mullet, with the occasional ghastly attempt to go blonde. But, there were triumphs, as well — there always are — like overcoming an eating disorder and "mastering" therapy; like getting some groovy bangs and an even groovier kitty.

After meeting my husband at 30, I cut off all my hair once again, mere weeks before our wedding. The night of, I donned a simple white wrap-dress (with splashes of — you guessed it — bright pink). I did my own makeup and wore no adornments in my pixie. The bar where we got married, the groom’s "fancy" sneakers, and, of course, my last-minute haircut — they were all a statement.

And what story is my hair relaying this time, after years of sitting in a messy mom ponytail? What is it about those reddish pink highlighter streaks I lovingly tend to every morning as my 1-year-old plays with my tampons?

My cool, new, very expensive stylist says the outside should match the inside. I guess, in that case, I hope my hair somehow hints that I’m a pink force to be reckoned with (#TimesUp suckers!). That I’m a coolish chick who is mom to even cooler chicks. That beyond drop-off and pickup, play dates and baby classes — and whatever may come next — I’ll always be just an immigrant kid trying to find my place... and the right style for my mullet-prone hair.

Unfortunately, my kid is none too pleased with my boldness. She feels that it’s her hair — ironically, an enviable mane of golden ringlets — which should be dyed pink, “Because, mommy, it’s my favorite color!”