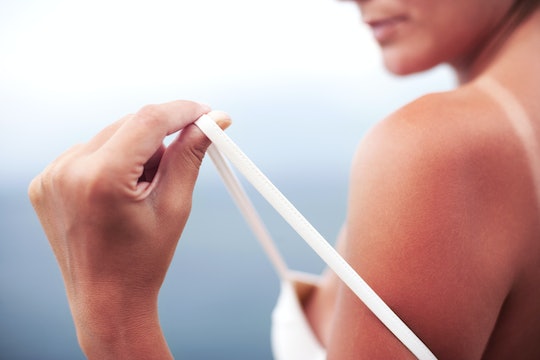 Over the years, scientists, experts, and everyday people have learned more and more about the effects of sun on your skin and your health. You're likely aware that getting sunburned can increase your risk of developing skin cancer, in addition to causing your skin to age prematurely and other things. You now likely know that wearing sunscreen, reapplying regularly, and spending time in the shade can lower these potential risks. You may not realize, however, that each sunburn you get increases your risk of skin cancer by a percentage, not just in general.

"One sunburn, typically considered severe with blistering and subsequent peeling, can increase the risk of melanoma by 1.5 to 4 percent (2.7 percent odds ratio). The risk of non-melanoma skin cancers also goes up by 1 to 2 percent, depending on what study you read," Dr. Sarina B. Elmariah, MD, PhD, a dermatologist as Massachusetts General Hospital and a member of the scientific advisory board at Evereden, a children's skincare brand, tells Romper by email.

But Elmariah also notes that the exact percentage increase in skin cancer risk from getting a sunburn is impacted by a number of different factors, including your skin tone, your family history, how many moles you have, and how many burns you've had in the past (as well as how severe they were).

Previously, WebMD reported that HealthDayNews noted that a 2014 study published in the journal, Cancer, Epidemiology, Biomarkers & Prevention found that white women who experience at least five blistering sunburns between the ages of 15 and 20 were at a much greater risk of developing melanoma (about 80 percent higher). Study author Dr. Abrar Qureshi, MD, MPH, the chair of the department of dermatology at Brown University's Warren Alpert Medical School, told HealthDayNews that melanoma risk was more highly associated with sunburns that happen earlier in a person's life, while other forms of skin cancer were related to either earlier or later in life sunburns.

Additionally, Allure reported that tanning bed use prior to the age of 35 can also increase your risk of developing melanoma. Though people might feel as though they understand the risks of tanning beds (and tanning outside), some adults dealing with skin cancer and other issues now would've used these tanning beds earlier in life, when they were teens. Because, again, sun exposure early on in life can raise your risk of the deadliest form of skin cancer, it's important to be vigilant about sun protection for the whole family. With so many products and techniques out there, however, it can be a bit daunting to choose which one might be the best for you and your family.

"I prefer natural sunscreens that are mineral-based, using non-nanotized zinc or titanium," Elmariah says. "Although such preparations are more whitening and don't rub in as easily, they are less likely to be absorbed into the skin and felt to pose less harm overall. Some sunscreens include Think Baby, Evereden, Badger, Blue Lizard and Purple Prairie Botanicals. I also prefer those that do not contain other harmful chemicals as well, such as parabens. I think Blue Lizard has some type of paraben in it, so it's actually a bit lower down on my list."

Like with anything else, doing your research is super important. Reading about the safety and efficacy of sunscreens and learning more about when and how often to apply them to maximize their effectiveness can help you feel confident that you're choosing the right products. Asking your dermatologist or another trusted expert for help can help you sift through all of the information, as well. There's not much you can do about the sunburns that you may have experienced in the past, but keeping yourself and your family protected moving forward can potentially help you keep things from getting any worse and help you feel more confident that you're doing the best that you can from here on out.