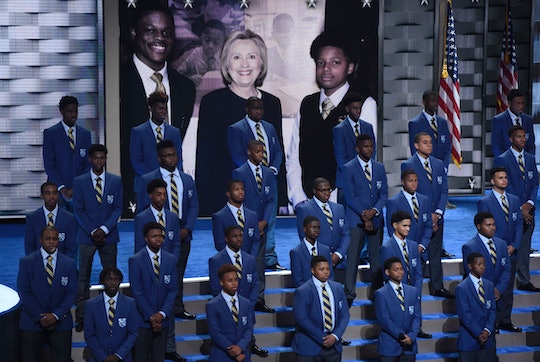 Tuesday night's Democratic National Convention in Philadelphia was just about to get a bit boring, until the Eagle Academy students recited "Invictus" and brought everyone back to life. The Eagle Academy is a consortium of all-male secondary schools that started in the Bronx, in New York City, and has five locations in the city and across the river, in Newark, New Jersey. Every day, they recite "Invictus," a poem by William Ernest Henley, that was also made famous by Nelson Mandela.

The students do this every day. It sort of makes you rethink that smoothie for breakfast, because "Invictus" is probably a much better way to start the day. The Eagle Academy is a public school, and employs unionized teachers, but paid for with some private funds that pay for longer days elongate and extra academic offerings, according to NY1. Most of the students are black and come from families living on the poverty line and the graduation rate is 83 percent. Clinton helped to create the school while she was a New York senator. Founder David C. Banks said in April of 2016 that "None of this would have been possible if it was not for the efforts and support of Hillary Clinton."

The students reciting "Invictus" was just the beginning, though. They introduced a series of speakers that included Tony Goldwyn from Scandal, talking about gun violence, the Pittsburgh Chief of Police Cameron McLay, finishing with mothers of young black men and women killed by gun violence and police brutality, including Sybrina Fulton, the mother of Trayvon Martin and Geneva Reed-Veal, the mother of Sandra Bland.

The segment of speakers had the crowd in the convention hall chanting, "Black Lives Matter," but no one on stage really, explicitly, addressed the movement. Except Fulton, the mother of Trayvon Martin, who admitted that she came to the movement slowly and went on to explain why Clinton was the candidate for women like her, mothers like her, and that she believed the candidate would work to eliminate gun violence.

It was a much different scene from the RNC last week, of course, where the Black Lives Matter movement was pitted against the rights of police officers to get the crowd excited. The DNC attempted to address the issue with the fierce recitation of "Invictus" by the Eagle Academy students and finishing with the mothers of victims of gun violence. It's going to be up to voters to decide what message they prefer.