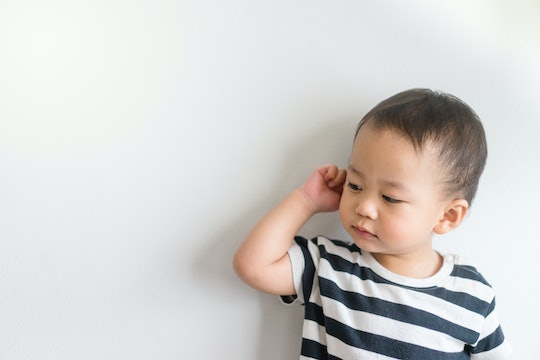 Chances are that at some point in your parenting journey, your child has had an ear infection. It's nearly inevitable, but that doesn't mean the tears, sleepless nights, or knowing your kid is in pain ever get any easier. After fighting a cold recently, I had an ear infection as an adult (strange, I know) and they really are as painful as I remembered. Hopefully by understanding why and how kids get ear infections, it won't be quite so daunting when it happens next time (unfortunately, ear infections are extremely common and there probably will be a next time).

“Five out of six children will have at least one ear infection by their third birthday," according to the National Institute of Health. "In fact, ear infections are the most common reason parents bring their child to a doctor.”

There are actually several types of ear infections, as Dr. Sarah Combs, pediatric emergency room physician at Children’s National in Washington, D.C., tells Romper. The most common is Acute Otitis Media, or AOM, which is an infection of the middle ear, according to Dr. Combs.

“This is the most common type of ear infection in kids, and it is what most people are thinking of when they say 'ear infection,'" she explains. "This is distinct from inner and outer ear infections, which are quite different entities. Acute Otitis Media (AOM) in children can be caused by bacteria, viruses, or a combination of both. The major bacterial strains are Streptococcus pneumoniae, non-typeable Haemophilus influenzae and Moraxella catarrhalis.”

This is why you may have noticed that your baby often shows signs of a cold before the ear infection starts: The two ailments are caused by the same bacteria.

But why are ear infections such a seemingly inevitable part of childhood? How do ears get infected in the first place?

“Ear infections are caused by bacteria getting trapped in the tiny, middle-ear space, leading to infection, swelling, and pain,” Dr. Natasha Burgert tells Romper. The ear infection itself is not contagious but “the cold that contributed to the development of the infection is often contagious,” Dr. Burgert says. Dr. Combs adds that an infection cannot pass "ear-to-ear, but if you also have cold symptoms, you can transmit the infection through sneezing, coughing, etc.”

In turns out kids actually have a different anatomy than adults, which is why they’re more prone to earaches. "The Eustachian tube (a passageway between the upper part of the throat and the middle ear) is narrower... and more horizontal in its orientation," Dr. Combs tells Romper.

"This means it is less effective at draining fluid away from the middle ear, making it easier for infection to take hold. Additionally, children’s immune systems are still developing which leaves them more vulnerable to infection in general.”

Signs that a child has an ear infection vary slightly by age. Infants may just seem “off” (and no one knows better than you when your child is just not quite right.) They may be more fussy than usual or not eating as much or as often as they typically do.

“Beyond the neonatal period, fever is a cardinal sign," says Dr. Combs. "Toddlers, unable to verbalize a specific pain location or sensation, may tug at the ear(s). School-aged children often will complain of pain or fullness [of] the ear.” Pulling on the ears is the most telltale sign, though in some cases, children can actually use this tactic as a self-soothing method, so it’s best to check in with their doctor if this is the only sign.

“Typically kids have signs of a cold," says Dr. Burgert.

"However, some kids have no symptoms at all with ear infections!”

It’s a good idea to get your child’s ears checked (and their pediatrician will likely do this anyway) whenever they have a cold, as untreated ear infections can lead to more serious issues including mastoiditis (inflammation of a bone near the ear, as per WebMD), and hearing difficulties, according to Harvard Health.

But most importantly, here’s what can you do to help ease an ear infection in your toddler, because I know you just want your sweet, not-screaming baby back. And sometimes, an ear infection will resolve in on its own, according to the Cleveland Clinic (mine did, for those of you who are very concerned about my health).

Dr. Burgert says, “offering pain control and letting your child's body fight off the infection on its own is certainly an option.” Waiting can be agonizing and sometimes inconvenient, though the Cleveland Clinic pointed out that children with ear infections can still fly (and in most cases, swim), though it will be more painful than usual.

"For an otherwise healthy school-aged child, it is appropriate to start… using an over-the-counter medication, such as ibuprofen or acetaminophen," says Dr. Combs. If symptoms persist after 48 hours on this regimen, it’s time to see the doctor, as antibiotics may be warranted. For younger children, the rules are different. Infants aged 6 months and younger should not undergo observation with pain control at home; if AOM is confirmed by your doctor, antibiotics will be started immediately. Parents of those between the ages of 6 months and 2 years also should consult with their doctor sooner rather than later as they may also require antibiotics in addition to pain control (methods can include a warm or cold compress on the ear, according to Healthline, or adjusting the way your child sleeps so there’s no added pressure on the ear).

Ear infections might be inescapable, but they're fortunately very treatable, too.

More Like This
The Covid Vaccine For Kids Under 5 Has Been Sent To The FDA For Review
Tick's Head Gets Stuck Under Your Skin When You Were Pulling It Out?
How To Properly Clean An Inflatable Pool
30 Easy Summer Activities For Kids That Work Rain Or Shine