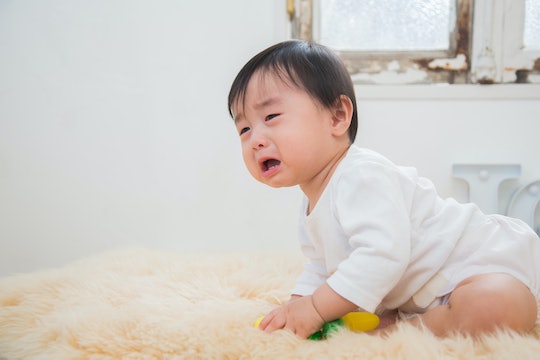 Early Flu Symptoms In Babies That Should Be Addressed ASAP

The flu is sounding really scary this year. Reports of children dying from it and the fact that the vaccine isn't covering as many flu strains as the Center For Disease Control (CDC) anticipated is giving everyone anxiety, especially new parents. Because babies are more vulnerable, and some are even too young to be vaccinated, it can be even scarier if they catch the flu. And since there are anti-viral drugs, like Tamiflu, that work best in the first 48 hours, it's important to be aware of the early flu symptom in babies, so that you can get them the treatment they may need STAT.

Babies can't look at their parents when they're sick and say, "Hey, mom, I feel like crap, and I'm achy and my head just doesn't feel right." Dr. Jill Leavens-Maurer, a pediatrician and Director of Pediatric Residency at NYU Winthrop Hospital in New York, tells Romper that the tell-tale signs are more behavioral than linked to how high the fever is. You need to be on the lookout for fever, irritability, and poor feeding as early signs that your baby might have the flu. "If your baby isn't easily consoled, ... more sleepy than usual, going longer between feedings, or goes eight hours without a wet diaper, this is cause for concern," she says.

In an interview with Romper, Dr. Gregg Rockower, a pediatrician in New York, says that, "The key with young children, especially babies under 3 months, is that if they don't look right or have trouble arousing or their breathing is more labored, this could be a sign of the flu." He says that the flu can come on abruptly and if you are concerned about your baby's behavior or appearance, even without the onset of fever, it's never a bad idea to bring them in.

The First 48 Hours Are Key

While you may be tempted to wait and see if your baby feels better with some Motrin or Tylenol, if you think it could be the flu, it's important to get to a doctor as quickly as possible. Dr. Leavens-Maurer says that babies over two months of age can receive this anti-viral medicine (frequently referred to by its brand name, Tamiflu), but it's only effective if it's given in the first 48 hours from onset of the virus. She warns that there are some gastrointestinal side effects, like belly pain and if your baby is vomiting already, the doctor might not be able to give them Tamiflu. This is a prescription drug, so you can't just buy it at the drug store, you need a doctor to prescribe it.

It's Not Too Late To Get A Flu Shot

While you may be hearing reports that people are getting the flu even if they have received the vaccine, the American Academy of Pediatrics (AAP) still recommends that children over 6 months old get the shot. Children who are 6 months to 8 years old will need two doses, 28 days apart. A 2017 study published in Pediatrics, the official journal of the AAP, said that the flu shot caused a reduction in the number of pediatric deaths from influenza. Simply put, the children who die from the flu are most likely the ones who did not receive the shot. Dr. Leavens-Maurer says that flu season can extend into April or May and it's not too late to get a shot, even if they are young enough to need the two doses. Children who get the shot and still get the flu typically have milder cases with shorter durations.

Since babies younger than 6 months cannot receive a vaccination, it's important for their parents, siblings and caregivers to be vaccinated. While many people, especially kids, hate needles, the flu nasal mist that had worked in other years is strongly discouraged from use by the Centers For Disease Control (CDC) as it will not be effective. Frequent hand washing and limiting the baby's exposure to other people, if possible, can also be effective at deterring the flu.

After A Flu Diagnosis, How Do I Know To Seek More Help?

The children who are hospitalized or die from the flu, are typically the ones who have complications, such as respiratory infections, meningitis or dehydration, according to Dr. Rockower. He says that the biggest thing to keep an eye on in a baby with the flu is their breathing. Very labored breathing is a cause for concern and good reason to contact your doctor again. He also suggests you watch for feeding issues, as dehydration can be very dangerous or fatal for a baby and but can be helped with hospitalization.

When Is My Baby Ready To Go Back To Daycare?

As frustrating as it may be to not be able to get to work, Dr. Rockower recommends waiting either five days from the beginning of the flu or 48 hours fever-free.

Unfortunately, even with all of the planning and protection and good intentions, babies still get sick. The best thing you can do is to try to make them comfortable, stay attentive, and call or visit your doctor as soon as you think it could be the flu. Meanwhile, hang in there — summer will be here soon.

More Like This
Cradle Cap Is Normal & So Is Your Desire To Get Rid Of It. Here’s How
Why Does My Newborn Shake Sometimes? A Pediatrician Explains
The Best Travel Tips For Solo Parenting
These 72 Instagram Captions Are Perfect For Your Snow Day Pics
What Parents Are Talking About — Delivered Straight To Your Inbox