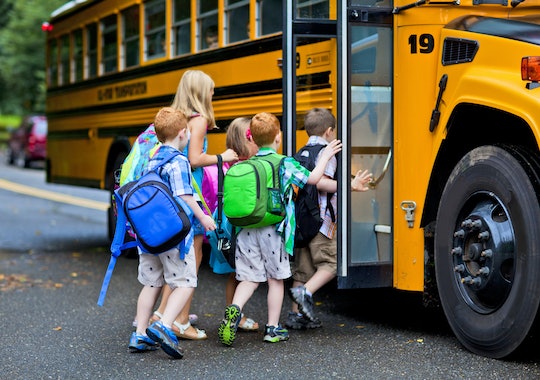 At some point in their lives, most kids complain about how early school starts — and who can blame them? For some kids, especially high schoolers who tend to start school earlier, making it to school on time might mean getting up as early as 6 a.m. Although some parents might brush off their kid's complaints, new research shows that early start times for school aren't the best for your children's health.

The Center for Disease Control and Prevention analyzed U.S. Department of Education data from the 2011-2012 school year. Within that study, the CDC found that although data did vary state to state, 42 states still reported that most (75 percent to 100 percent) public middle and high schools started before 8:30 a.m. That might not seem too early to someone working regular 9 a.m. to 5 p.m. hours, but it's important to remember that commuting to school can be quite an ordeal.

These early start times, according to the CDC, are negatively impacting children in many ways. From jeopardizing their emotional and mental health to causing poor performance in school, the consequences are actually pretty severe. And (unsurprisingly, for anyone with children) the majority of these issues can be traced back to one thing: inadequate sleeping schedules.

That trope of teenagers sleeping the day away has to come from somewhere, right? It's not pure laziness that's keeping teenagers in bed, but shifting internal clocks. As noted by the Mayo Clinic, puberty causes a teen's internal clock to change, delaying the time they start to feel sleepy or properly awake.

The American Academy of Sleep Medicine recommends that teenagers between the ages of 13 to 18 years old sleep 8 to 10 hours per day for good health. As outlined by the CDC's report, teenagers who don't receive adequate sleep are more likely to suffer from symptoms of depression, engage in unhealthy risk behavior, perform poorly in school, and not engage in physical activity.

And, yet, for many teenagers reaching 8 to 10 hours of sleep each night is almost impossible. Let's break it down like this: imagine your child in a high school that starts at 8 a.m. (since many schools start before 8:30 a.m.) and ends around 3:30 p.m. The average commute for students, according to Chalkbeat, was 32 minutes — although 1 in 5 students had commutes longer than 45 minutes each way. So, we'll split between that and say it's a 40 minute commute and say it takes an hour to get ready.

If your kid wants to get to school on time, they need to wake up around 6:20 a.m. Which means, if they sleep a full eight hours, they went to bed around 10:20 p.m. That might seem late, until you remember that high schoolers receive an average of 3.5 hours per night, according to U.S. News & World Report.

Let's make it easy and assume your kid has no after school activities and doesn't work. Even without those hours, your child won't be home until after 4 p.m. After homework, they have maybe three hours to socialize with family and friends, do chores, and get ready for bed.

That's obviously a lot for a teenager to maintain.

In addition to benefiting sleep schedules for all students, later start times may actually benefit the economy as well. A study from RAND found that later start times may be cost effective. According to their findings, researchers proposed that "even after just two years, the study projects an economic gain of $8.6 billion to the U.S. economy, which would already outweigh the costs per student from delaying school start times to 8.30am." As noted in RAND's press release, an additional hour of sleep is estimated to increase the probability of high school graduation by 13.3 percent and college attendance by 9.6 percent. Both of these greatly impact the jobs that teenagers can obtain in the future, along with how much they can contribute towards the economy through future earnings.

The CDC suggests that parents contact local school officials about introducing later start times. They may be reluctant at first, but change may come eventually.

Besides, it's time to start taking kids' concerns seriously. Some might be complaining just because they don't like school, but their health still shouldn't have to suffer. It might just be time for schools in the United States to introduce later starting hours.