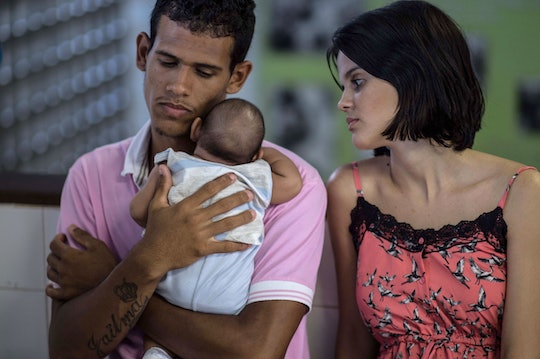 In the continental United States, there have been 618 reported cases of the Zika virus, 11 of which were sexually transmitted. The rest have been traced back to travel to a country where Zika is endemic. As of now, there have been no reported cases of local transmission, but as temperatures rise and insect populations grow, health officials are predicting that will change. State, local, and federal organizations are mobilizing to fight the spread of the disease because of the devastating effect it can have on pregnant women. But what about children? Here are the early signs a baby might have gotten Zika.

While the risk of contracting Zika is greatest for pregnant women, it does pose a risk to babies because of their weaker immune systems. As of now, there have been no reported cases of a baby getting Zika through breastfeeding, so the most likely mode of transmission — for anyone, at any age — is through a mosquito bite. According to The Centers for Disease Control and Prevention, the virus is most often carried by infected Aedes mosquitos, which bite day and night, indoors and outdoors. If a baby is bitten by an infected mosquito, he or she may develop flu-like symptoms. According to the CDC, symptoms of Zika can include a rash, pink eye, sore muscles and joints, and a fever. They can last up to a week. Though these symptoms sound mild, they can be dangerous for infants. If your child has any of these symptoms or if someone in its proximity has traveled to Central or South America recently, medical professionals advise that you seek testing.

When it comes to the virus's symptoms and effects, there are still a lot of unknowns because of how quickly it can mutate. There has been one case in the United States of someone infected with Zika developing Guillain-Barré syndrome linked to the virus. The condition is rare and causes neurological damage. If a baby is infected, there is the chance it could develop that complication. The one death in the United States caused by Zika was due to the victim's autoimmune reaction to the virus. In short, though the symptoms are general, their resulting complications can be deadly.

When it comes to mother-to-baby transmission of the Zika virus, there are two main methods: perinatal and congenital. Congenital is the more serious of the two because that is when a mother is infected during pregnancy. The CDC has confirmed the link between Zika and the developmental defect microcephaly, among others. Though the CDC is currently monitoring the pregnant women in the United States who have been infected, no one knows the likelihood of Zika transmission if a mother is infected, according to CBS News. What is certain is that fetuses in utero are most vulnerable and most susceptible to complications from infection (including birth defects) during the first trimester of pregnancy.

The second method of transmission is perinatal, which is when a pregnant woman is infected within two weeks of delivery and passes the virus to her baby during labor. If a baby contracts the virus in this way, it will most likely result in the flu-like symptoms the virus is known for, but not microcephaly.

Though there are several organizations all over the world working on a cure, there is currently no vaccine for the Zika virus. The best way to protect babies and young children is to seek medical attention if they show symptoms, get rid of any standing water or potential mosquito breeding grounds, avoid travel to Zika-affected countries, and use insect repellent, mosquito nets, and screens to minimize contact with the virus's carriers.