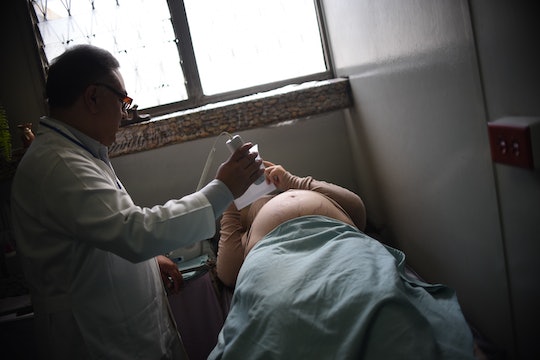 Early Signs Of Microcephaly That Could Indicate A Problem

With Zika spreading across the United States, the fetal fears that began in Brazil have come a lot closer to home. According to The Washington Post, several women have faced the effects of contracting Zika virus during their pregnancies: one woman has already given birth to a baby with severe birth defects, while other mothers have miscarried or chosen to abort fetuses with early signs of abnormalities. Mothers who have Zika or are concerned that they could contract it are facing serious decisions and uncertain futures, leading many to wonder if there are any early signs of microcephaly.

After birth, microcephaly is fairly easy to diagnose, although the severity of the condition varies from infant to infant. According to the Centers for Disease Control and Prevention and the Boston Children's Hospital, typical microcephaly symptoms after birth include a head with a circumference two standard deviations below the average, failure to thrive, high-pitched crying, low appetite, and involuntary muscle contractions.

While still in utero, however, diagnosing microcephaly isn't quite as cut and dry. According to the CDC, "Microcephaly can sometimes be diagnosed with an ultrasound test (which creates pictures of the body)." The CDC recommends going for an ultrasound late in the second trimester or early in the third trimester, although women who have contracted Zika should definitely see their physicians and undergo monitoring and regular ultrasounds as soon as possible.

Even if early ultrasound results show a healthy fetus with no signs of microcephaly, mothers are not necessarily in the clear, as abnormalities can show up later in pregnancy. According to The Washington Post, one woman's ultrasounds at 13, 16, and 17 weeks of pregnancy went flawlessly — but at 19 weeks, her ultrasound revealed fetal abnormalities. She also tested positive for Zika long after her symptoms subsided: 10 weeks after the Guatemalan trip where she likely contracted Zika, she was still testing positive for the virus.

The signs of microcephaly while in utero include a small head and calcifications of the brain, which look like white spots, according to The Washington Post. The presence of those key signs or other brain abnormalities (such a large amount of fluid in the fetus' brain or a thin cerebral cortex) typically leads to a fetal MRI to investigate further.

Unfortunately, ultrasounds aren't typically effective at detecting microcephaly before the second trimester (as per CDC recommendations), according to The New York Times. If pregnant women suspect that they may have contracted Zika or live in an affected area, their best bet is to get tested for the virus at least twice throughout their pregnancy, regardless of whether they display Zika symptoms.

Other than that, your best defense is a good offense — namely in the form of mosquito protection, applied early and often.