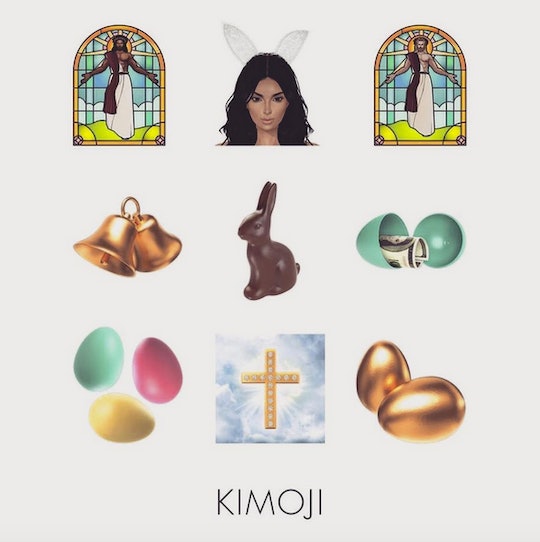 Easter-Themed Kimoji Are Everything You Need To Celebrate Properly

Consider it your Easter present: Kim Kardashian released Easter-themed Kimoji Thursday, and it's everything you would think it would be (black Jesus included!). The reality star announced the latest additions to her mega-popular app on her website and various social media accounts, according to Us Weekly, and, somehow they filled an emoji void the world didn't even know it had. The collection — which will be automatically added to your keyboard if you use iOS — includes a mix of religious and non-religious images: Easter eggs, a chocolate Easter bunny, a cross, and two different Jesus emojis. But since it wouldn't be Kimoji without Kim's face, there is also a 'Kim with bunny ears' emoji, and an Easter egg containing a wad of cash (how do I get in on that Easter egg hunt?!).

It's almost Easter! I want to give you guys a little surprise: new Easter Kimoji! There are over a dozen new Kimoji, including colorful eggs, me in bunny ears and a fun KIMOGIF! Easter is a really big deal in my family and I get super into it. These new Kimoji are seriously soooo cute, I can't deal!!!

Kardashian's Kimoji app has been insanely successful, and even caused the Apple store to crash on release day according to the Daily Mail. And given all the Kardashian sisters' fondness for the holiday, Easter-themed Kimoji must have seemed like the perfect way to for her to further Kardashian-ify all our lives. (Uh, heads up, everyone in my phone contacts: you're about to be sent Kimoji Easter eggs.)

But of course, Kimoji isn't the only big Easter-related event in the Kardashian-West household. According to the Daily Mail, Kim and Kourtney took their daughters North and Penelope for an Easter egg hunt at Underwood Farms earlier in the week. And judging by Kourtney's Instagram, it looks as though that wasn't the end of the fun: the eldest Kardashian posted a photo Wednesday full of over-the-top Easter baskets, presumably for the Kardashian kiddies.

That's not the only Easter-related pic Kourtney posted though. She got a little nostalgic, sharing a super cute photo on her website and app of herself and Khloe when they were kids, wearing Easter dresses and floppy hats. According to People, she explained,

I have so many memories with my siblings of getting dressed up and going on Easter egg hunts together. We couldn't wait to see what the Easter bunny brought us.

Lucky for North and Penelope, their Easter dresses will surely be much more fashionable.