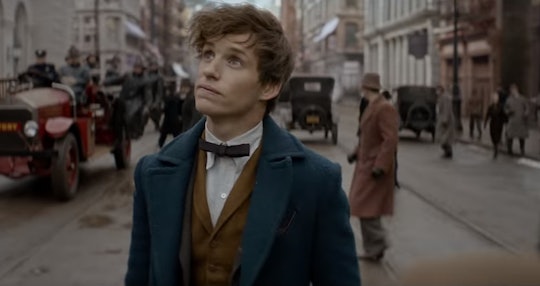 Harry Potter fans had an exciting summer with the release of J.K. Rowling's Harry Potter and the Cursed Child book, but that's only the beginning. Pottermania continues through the fall as Fantastic Beasts and Where to Find Them, a film inspired by Rowling's book of the same name, enters theaters on Nov. 18. Newt Scamander is the protagonist of this film, and I can already see little Potterheads wanting to recreate his attire this Halloween. Luckily, an easy Newt Scamander Halloween costume for your kid can be created from elements in your closet (or after a quick trip tot he thrift store.)

In case you haven't brushed up on your Potter history lately, Newt Scamander is a Magizoologist and writer of the textbook Fantastic Beasts and Where to Find Them, which is studied by Hogwarts students. In the film, Scamander arrives in New York City in 1926 for an important meeting with a briefcase filled with magical creatures. A few escape and it sends the city, as well as the magical and non-magical political relations, in to an upheaval. It is sure to be an exciting adventure.

Get your little one ready to catch some fantastic beasts on Halloween with this easy Newt Scamader DIY costume.

More Like This
From Captions To Gifts, These Are All The Kindergarten Graduation Ideas You Need
The Ultimate Baby Registry Checklist
Ashley Graham On The “Fun, Organized Chaos” Of Raising Twins
Prince George Has Apparently Known He'll Be King Someday For A While Now