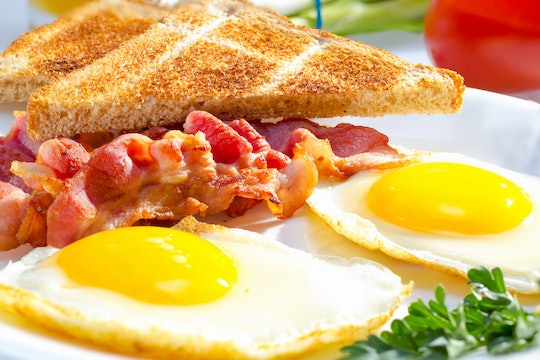 Eating Bacon & Eggs During Pregnancy Could Boost Your Baby's IQ, So Eat Up

You've probably heard the age old adage by now, "breakfast is the most important meal of the day," which has torn people apart for centuries. Many people don't have an appetite for eating in the morning, while others (like myself) can't get enough pancakes, cereal, and toast. But this adage might be something that expectant moms want to listen to, after a recent study found that eating foods like bacon and eggs during pregnancy can boost your baby's IQ. Never has breakfast sounded more appealing.

The study's findings weren't too complicated or hard to decode — eating certain foods has the potential to make your baby smarter. The study, published in the Journal of the Federation of American Societies For Experimental Biology, found that mothers who ate bacon and eggs during the last three months, or their last trimester, were more likely to have babies with higher test scores and a potentially higher IQ in childhood, as they scored better in postnatal testing, according to The Independent.

What's the secret? Choline, which is a nutrient that is in bacon and eggs but isn't typically found in your average prenatal vitamin, according to Fit Pregnancy. Dr. Eric Hodgson, a maternal and fetal medicine specialist in Hartford, Connecticut, explained the importance of choline to Fit Pregnancy:

Choline helps the baby's brain cells to develop and function normally and protects against birth defects like spina bifida. Some studies have shown that it can also improve a baby's IQ and protect them from other mental problems like depression.

Talk about being the most important meal of the day.

If you think the findings of this new study sounds familiar, it's because they are. In 2010, researchers at the University of North Carolina were able to determine that choline played a "critical role" in helping fetal brains develop in the regions most associated with memory, according to Science Daily. But that study was conducted on mice, not humans, according to The Telegraph. And while those findings allowed people to infer that choline was good for fetal development in humans, this new study actually confirms it.

How much choline is necessary? It is recommended, according to Science Daily, that women eat 425 milligrams of choline a day. A large hardboiled egg contains 147 mg of choline, according to the Department of Health and Human Services. Eating four hardboiled eggs a day doesn't seem like too much of a challenge.

But if breakfast really isn't your favorite meal of the day, choline is also abundant in salmon, wheat germ, brussel sprouts, broccoli, milk, peanut butter, and even chocolate, according to the Oregon State University. Therefore, your average dinner and favorite dessert could also contain enough choline to make your baby the smartest kid on the block — figuratively speaking, of course.

In addition to a high IQ, choline can help your fetus in many other ways. One 2015 study found that consuming a choline rich diet while pregnant potentially decreased the risk of mental illness in your baby. Another 2015 study found that choline eased the baby's response to stress in the womb. But don't think that eating 15 eggs a day will make your baby the next Bill Gates or Steve Jobs. Excess choline in diets, according to Reuters, does not improve a baby's language or memory skills any more than the average amount of choline does.

If only there was as much choline in ice cream and cookies as there is in bacon and eggs.