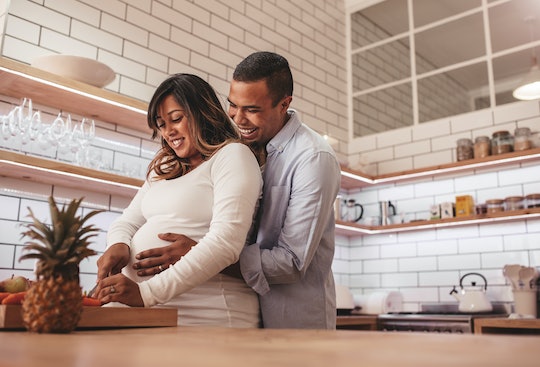 Adding This Food To Your Pregnancy Diet May Boost Your Baby's Development, New Study Finds

Doctors have long known the importance of maintaining a healthy diet during pregnancy, but it seems like there's new research practically every day on foods groups expectant moms should be heavily concentrating on. Well, as a new study has found, eating certain seafoods during pregnancy may actually enhance babies' healthy development, so dust off those cookbooks.

A small-scale study out of the University of Turku and Turku University Hospital in Finland, as outlined on ScienceDaily, has echoed the fact that regular intake of fatty seafood during pregnancy may work to enhance an unborn baby's eyesight and brain function. The findings — which were recently published in Springer Nature's Pediatric Research Journal — detail that the fatty acids in seafoods may improve areas of a developing brain that dictate eyesight, particularly the retina. These fatty acids also play a more vital role than has been previously realized in forming the human nervous system, according to the new study.

As a 2014 BBC article on a different study involving kids who were behind in school and Omega 3 fats added to their diet detailed, the Omegas found in mackerel or salmon boost brain power. As electrical signals travel through the brain, the BBC detailed, they go from one brain cell (neuron) to another. When the signal leaves one brain cell, it crosses a physical gap before entering the next neuron. For signals to enter a neuron, they have to pass through a wall, or cell membrane, and these walls are made of fat. Thus fish or fish oils clearly help the brain process and pass along information, although, as the BBC added, the full extent of how this complex process works is not yet known.

But this new research certainly adds to this beneficial link. As Kirsi Laitinen, Ph.D., who led the study, concluded, to ScienceDaily.

The results of our study suggest that frequent fish consumption by pregnant women is of benefit for their unborn child's development. This may be attributable to long-chain polyunsaturated fatty acids within fish, but also due to other nutrients like vitamin D and E, which are also important for development.

Dr. Laitinen added, according to ScienceDaily, that the findings should be incorporated into prenatal nutritional counseling offered to pregnant women.

As the study detailed, Laitinen and colleagues arrived at their conclusions by analyzed data from 56 mothers and their children, finding out about dietary habits by asking moms to keep pregnancy food journals, according to Medical Xpress.

According to Medical Xpress, when the babies were born, the investigation team tracked the levels of fatty acids in the mothers' blood, and also took the blood from the infants in the study when they were 1 month old. The results showed, according to Medical Xpress, that the babies of mothers who ate fish three or more times a week in their third trimester performed better on developmental tests than those whose moms ate no fish or up to two portions per week.

Fish oil had already been known to be beneficial during pregnancy, with a study at London's Imperial College earlier this year making a link between fish oil consumed in pregnancy and a lower risk of developing some allergies, as reported by the Daily Express. And a previous study from Japan detailed that it's a prenatal balance of the omega oils — omega-6 and omega-3 — found in the right combination that protects fetal brain development from abnormality, as reported by Parents magazine.

Clearly, there will be more details to come about diet in pregnancy, and the benefits of seafood in particular. Anyone pregnant or even thinking about a baby might as well book your next dinner reservation at that new seafood place on the pier or harbor, and make a delicious, nutritious, night of it.