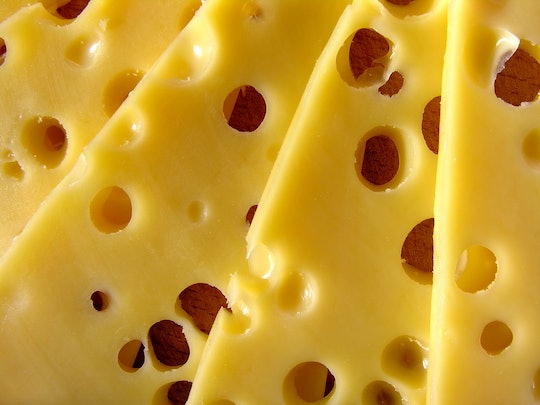 Eating A Little Bit Of Cheese Every Day May *Actually* Be Good For You, Study Says

If there's one thing out there guaranteed to make people of all ilk nod their heads in agreement of its glory, that's cheese. And now, as new research has shown, eating cheese every day may actually be good for your health. Researchers in China and the Netherlands have published new findings in the European Journal of Nutrition, which suggests that daily cheese consumption could come with some health benefits that far outweigh the other, more negative, side effects of eating cheese.

Obviously, anyone out there who is lactose intolerant or sensitive to dairy still probably should stay away from cheese, but these new findings are still pretty significant. Cheese has long carried a lot of negative connotations with it. That's because cheese is generally high in calories, fat, and sodium, — and that's not all. According to Konbini.com:

Cheese also contains conjugated linoleic acid, which is an unsaturated fatty acid that may increase the amount of "good" HDL cholesterol in our bodies and decrease "bad" LDL levels.

Additionally, cheese also tends to contain hormones that can cause issues in women. Speaking to In Style, esthetician Renee Rouleau explained:

The majority of milk in the U.S. comes from pregnant cows (and some cows are given growth hormones), the hormone levels in milk may play a role in excess sebum production, which promotes acne.

While Rouleau was talking about milk, specifically, she also explained that "the consumption of milk, cheese, and yogurt may become factors that influence endogenous hormones and mimic the hormones that trigger oil production in the skin to ignite the acne process."

But now, at least there's some good news in regards to cheese. As the New York Daily News noted, "Overall, those who ate more cheese had a 14% lower risk of developing heart disease and were 10% less likely to have a stroke than their cheese-averse peers."

The researchers also want people to know that these findings aren't advocating for everyone to go out and eat a wheel of brie every day; the people they observed who had the most success with daily cheese consumption were only eating small amounts — about 40 grams per day, which is roughly 1/3 of a cup.

And that's an important takeaway because those in the study who ate a lot of cheese didn't see the positive benefits. As Konboni.com put it, "those eating a lot of cheese were judged more at risk of both than anyone else." What's more, a 2014 study published in Science Daily actually found that "meat and cheese may be as bad for you as smoking." That particular study focused on middle-aged participants, but its results are still worth noting.

Nevertheless, this most recent study wants more people to be aware of the benefits of cheese, such as probiotics, calcium, and protein. So, really, it seems to be about moderation and finding what your body needs more than anything else. But, if you've been staying away from cheese completely in order to try and be healthy, go ahead and eat those 40 grams. You deserve them.