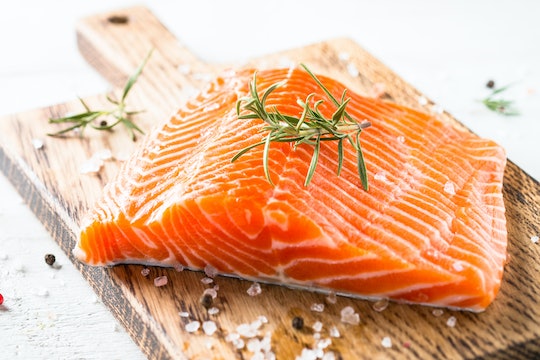 Pregnancy has its challenges, and finding things that are both healthy and tasty to eat is definitely one of them. But there's some good news out there for fish lovers: That's because a new study claims that eating fish while pregnant is linked to lower risk of ADHD in kids.

A study published in the International Journal of Epidemiology Wednesday found that children around 8 years of age, whose mothers ate four servings of nutrient rich fish a week, scored 16 percent higher on attention span testing, according to the Daily Mail. Oily fish like salmon and mackerel seemed to have the biggest effect when eaten during the first trimester of pregnancy, a time when most of the brain development takes place, according to Stanford Children's Health.

To come up with the findings, researchers at the Barcelona Institute for Global Health looked at the diets of 1,641 mother-child pairs. The mothers filled out questionnaires asking them to mark the foods they ate and when, while children's dietary habits were assessed in the same manner at ages 1, 5, and 8, according to the Daily Mail. Parents were then asked to rate their child using the Revised Conners' Parent Rating Scale Short Form to assess the presence of potential ADHD symptoms.

And in case you didn't know already, ADHD, or attention deficit hyperactivity disorder affects a person's ability to pay attention, the ability to sit still, and self-control, according to Kids Health. The ADD Research Center estimates that 6.4 million American children ages 4-17 have ADHD.

Despite the study's findings, the Food and Drug Administration (FDA)'s guidelines hold firm, suggesting women should eat just 2 to 3 servings a week of fish during pregnancy, according to The Mayo Clinic.

If fish is to be consumed, low mercury fish like light canned tuna, cod, mackerel, and trout is recommended, according to WebMD. Too much mercury can be toxic and has been linked to developmental issues in unborn children, according to the outlet.

And don't get too excited about eating more fish as views about raw fish remain the same. That's because raw fish has a higher potential to carry listeria, a bacteria that could be potentially harmful for baby and mother, according to The Bump.

So are there any downsides of eating that much fish, besides potential mercury poisoning? "The authors of the study also warn that previous research have reported a link between the consumption of fish during pregnancy and childhood obesity and increased blood pressure," said Nichola Ludlam-Raine, a dietitian and member of the British Dietetic Association, according to the Daily Mail.

And she offered important advice, stating: "My advice to pregnant women would be to enjoy oily fish such as salmon, mackerel, sardines, and pilchards no more than twice a week in addition to white fish such as cod and haddock, which are excellent sources of protein"

It seems like fish still remains a questionable food for pregnant women even though some studies claim it can also yield positive results. And as with any health-related issue, the best source for information is your own doctor.