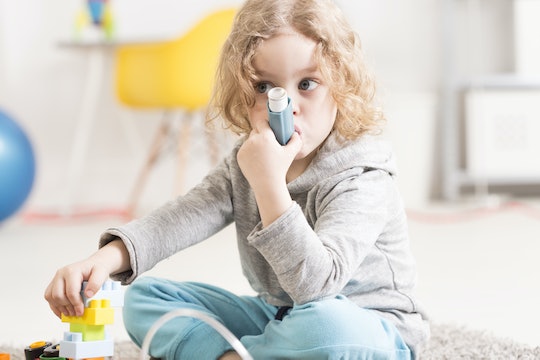 If Your Kid Has Asthma, New Research Says Adding This To Their Diet May Help Ease Symptoms

Fish may not seem like it makes that big of a difference in people's diets, but researchers are finding more and more benefits to it. The benefits of fish oil during pregnancy have seen increased coverage, but what can fish do for kids after they're born? According to new research, eating more fish may help ease asthma symptoms in kids. If you're a parent of a kid with asthma — or have it yourself — that's a pretty big deal.

Asthma refers to a chronic condition that causes your airways to "narrow and swell and produce extra mucus," according to Mayo Clinic. Asthma can make it difficult to breathe, as well as make you cough or wheeze. For some people, asthma is just an annoyance or complication, but it can pose bigger problems for others.

In 2009, about 1 in 10 kids had asthma, as reported by the CDC, with the numbers increasing every year. Asthma is caused by both environmental and genetic sources, according to Richmond Asthma & Allergy Specialists. WebMD outlined that environmental factors like pollution, especially chilly temperatures, high humidity, and more can trigger asthma in people who are predisposed or susceptible to developing the condition.

Asthma symptoms can be nuisances, but they can also be serious. And according to new research, eating more fish may be key to helping manage them.

A trial led by La Trobe University in Australia studied the impact that eating fish as part of an otherwise healthy diet can on asthma symptoms in kids, as outlined by the study's abstract.

Researchers worked with 72 children from Athens in Greece, aged 5 to 12, who all had mild asthma, according to the study's abstract. The children were then divided into two groups. Half of the children were instructed to eat two meals of cooked fatty fish as part of the Greek Mediterranean diet every week for six months, while the remaining children followed their normal diet. At the six-month mark, about 64 kids were participating.

Researchers found that eating fatty fish helped reduce asthma symptoms in children, as noted by Eurek!Alert. The team found that those who ate fish "had reduced their bronchial inflammation by 14 units," and since any reductions higher than 10 are internationally considered to be "significant," that's a big deal.

"We already know that a diet high in fat, sugar, and salt can influence the development and progression of asthma in children and now we have evidence that it's also possible to manage asthma symptoms through healthy eating. Fatty fish is high in omega-3 fatty acids which have anti-inflammatory properties. Our study shows eating fish just twice a week can significantly decrease lung inflammation in children with asthma."

The Greek Mediterranean diet that researchers examined includes plenty of olive oil, healthy grains, fruit and vegetables, and a "moderate amount" of meat, fish, and dairy. This diet is often considered to be the reason why those across the Mediterranean region live longer, healthier lives, as outlined by the Hellenic Republic.

Fatty fish that are high in omega-3s include salmon, Atlantic herring, anchovies, and trout, as reported by Web MD.

As asthma rates climb, it's important for parents to be aware of remedies that can be used alongside medicine. A Greek Mediterranean diet may not be the model followed everywhere, but parents of kids with asthma may want to look into incorporating more fatty fish. You never know, it might really help.

More Like This
Parents Are Missing Work At Record-Breaking Rates To Take Care Of Sick Kids
Yes, It’s Possible To Get Pregnant If You Have An IUD
How Old Should Kids Be Before They Watch The 'Christmas Story' Sequel?
Rubble From 'PAW Patrol' Is Getting His Own Spinoff Series Full Of "Messy Demolition"