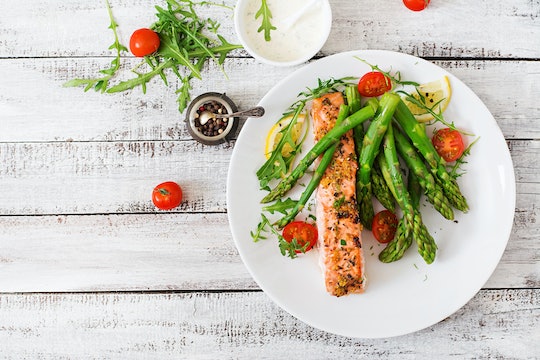 This Type Of Fish During Pregnancy May Make Your Baby Stronger, New Research Finds

If you're pregnant, it might be time to start considering some seafood dishes. Fish has always been a ground for intense debate regarding whether it's safe for pregnant women. But, according to new research, eating oily fish during pregnancy may make your baby stronger. It might be time to review those salmon recipes!

With all the current hype surrounding omega-3 supplements, it makes sense that people are now looking directly to the source. In the past, studies have noted that kids who took omega-3 supplements were more zen, as noted by BigThink. And, recently, one study found that omega-3s reduce preterm risk, according to WBUR.

Omega-3 fatty acids are crucial to a healthy diet, with functions ranging from providing energy to cell repair, according to the CDC. They're an increasingly popular supplement. You may see under the name of fish oil supplements because, well, they come from fish.

That's right, as outlined by Eat Right, foods that are rich in omega-3s include salmon, sardines, fresh tuna, and trout.

To fully understand the impact that fish oil has, researchers decided to look into its impact when consumed by women during pregnancy. So for all the women who've been craving fish and holding back, the results of this study are promising.

Looking into the impacts of diet during pregnancy is no small thing. As Professor Hans Bisgaard, who led the research at Copenhagen University said, according to The Telegraph, "Diet during pregnancy and infancy is an important determinant for children's development and health."

As medical knowledge evolves, so has some of the conventional wisdom surrounding pregnancy. The majority of women grew up hearing that they shouldn't eat fish while pregnant, for example. That was largely because of fear around mercury levels. However, last year the FDA and EPA issued some handy advice around safe fish choices because, it turns out, you can actually have some seafood.

For this study, researchers based in Britain and Denmark recently published their findings in the British Medical Journal. As outlined by The Telegraph, the trial ultimately involved 736 pregnant women who consumed either fish oil or olive oil daily starting from week 24 of pregnancy up until one week after birth.

Researchers kept track of height, weight, head, and waist measurement that were assessed 11 times from a baby's birth to age 6, according to The Telegraph, with adjustments for age and sex. At the end, the findings found a sustained higher body mass index from 12 months to 6 years of age, as reported by The Telegraph. As the researchers wrote in the study's findings:

In other words, the kids whose mothers had taken fish oil supplements? They were consistently larger.

So, it's great to know that you can eat oily fish and it might be beneficial to your kids, but what are those even?

Oily fish include salmon, sardines, trout, herring, and mackerel, according to Medical News Today. In the linked USDA graphic above, you can also see what fish the USDA recommends when serving your family, such as anchovy, freshwater trout, and herring.

The important thing to know about fish safety is that a lot depends on your location. There are still concerns around mercury levels, according to the FDA, but people in Denmark have access to different fish than people in the United States, for example.

Overall, though, studies are showing again and again the benefits of eating fish. If you feel that it's too much of a risk, though, you can definitely look into taking fish oil supplements. The pregnant women in the study did use fish oil supplements, after all. As always, though, be sure to check in with your doctor before changing your diet too dramatically.

As what makes up conventional wisdom continues to change, it'll be interesting to see what other "rules" around pregnancy diets start to shift. One thing is for certain, though: clearing up all this information is making pregnancy at least a little bit easier for mothers.