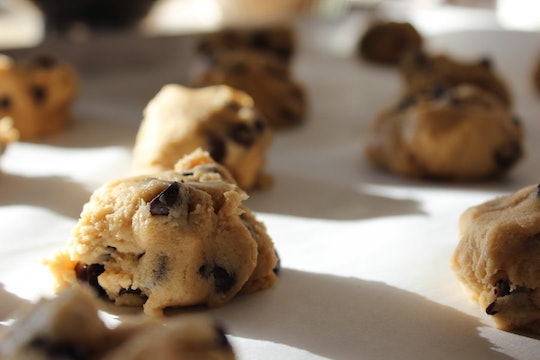 Haters of all things good in life have long warned that eating raw cookie dough is bad for you. But that's just a myth that killjoys spread to keep you away from the mixing bowl, right? Alas, it is not. According to a new study out this week, eating raw cookie dough is actually much worse for you and your family than you might have thought, if only because now there are now two ingredients to be potentially worried about mixing into your dough. Seriously, can this year get any worse?

Once upon a time, I was told that eating raw cookie dough was bad for you because of the possibility that the raw eggs carried salmonella. But then I got the internet and learned that the chances of getting salmonella from a raw egg are insanely low and most eggs in the U.S. are pasteurized, which means they're safe to eat and my mother was just trying to save the batter for herself. Sneaky, sneaky.

As an act of defiance, I've spent most, nay all, of my adult life licking the spoon, the bowl, and straight up just eating my chocolate chip cookie dough before spooning them out onto a baking sheet. TBH, the idea of eating the cookie dough is one of the reasons I often decide to start to get off the couch and break out the electric mixer in the first place. Don't judge my self care practices.

Alas, it is not the eggs, but the flour that us cookie dough lovers should be thinking about. Though if you have a taste for raw cookie dough, you might want to stop reading now, lest I ruin your entire holiday baking routine.

Here's the deal: In 2016 about 10 million pounds of flour were recalled for an E.coli contamination by the Centers for Disease Control and Prevention. It was weird, because scientists and experts usually think of E.coli being something that lurks in more moist environments, like uncooked meat or bagged lettuce. So they looked into it.

This most recent study, published in the New England Journal of Medicine, tried to get at the bottom of the flour recall and they found what they thought they would — that E. Coli can "thrive" in arid environments, such as the flour you use to bake cookies.

Samuel J. Crowe, the lead Debbie Downer, er, lead author of the study and an epidemiologist with the CDC's food-borne and environmental diseases division, told the New York Times in a statement:

We’re not trying to ruin people’s holidays but we want them to be aware of the risks. The bacteria is not uniformly distributed in a two-and-a-half pound bag of flour. A small amount could get you really sick. I’ve had E. coli and salmonella and it’s pretty darn unpleasant.

He's right about that. E. coli and salmonella are pretty dangerous, especially for kids, pregnant women, or any one with a weakened immune system. Most of the symptoms for both of them are stomach related and pass within 5 to 7 days, according to the CDC. But they can be life threatening. The victims of last year's flour recall all survived, but some were hospitalized and one person even went into kidney failure.

In effect, this new study is more about flour in general than it is cookie dough, since it's a whole new way of thinking about the product. Dr. Marguerite A. Neill, an associate professor of medicine at Brown University Medical School and an expert on food-borne illnesses, who wasn't involved in the study, told the New York Times, "It’s a new view of flour. It would have seemed incredible that this dry, powdery substance, stored on a shelf for months, could have a live micro-organism that didn’t spoil the flour but still could make someone sick."

The CDC researchers recommend that you wash your hands after handling any flour at all, like after dredging chicken breasts or throwing a little flour around the table to knead bread, or even homemade play-dough, because risking an E.coli outbreak in your house just isn't worth it, especially during the holiday cookie baking season.

Luckily, if you absolutely *need* a safe alternative to a cookie dough binge, you can always go for the pre-made, refrigerated stuff or a pint of cookie dough ice cream. That's all been pasteurized and the flour has been "heat treated," which means there's no chance of salmonella or anything else in it.

I'll guess I'll be crossing cookie dough off my list of things that bring me joy. What will 2017 take from us next?