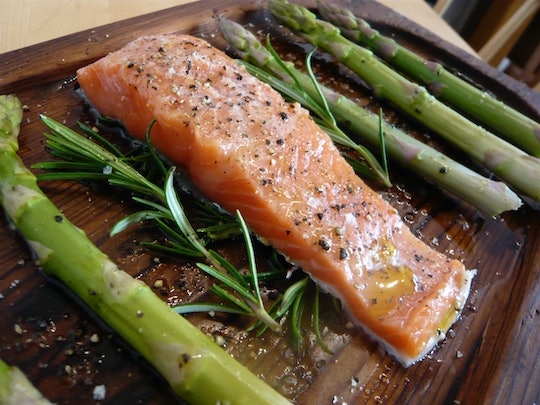 Who would have imagined that eating fish while pregnant could have an amazing health benefit for your soon-to-be bundle of joy? A recent study discovered eating salmon during pregnancy may reduce the chance of your child being diagnosed with asthma, compared to children whose mothers did not eat the oily fish. Of course, don’t go overboard — twice a week is sufficient — but feel free to order the salmon special you were eyeing the next time you’re out to dinner.

The Salmon in Pregnancy Study found children of mothers who ate salmon twice a week from half-way through their pregnancy until birth were less likely to have asthma by the time they turned three.

Allergy tests were performed on the children at six months and then at two to three years of age. The results were compared to a control group whose mothers did not eat salmon during pregnancy. Researchers found that early on, at six months, there was no difference in allergy rate between the two groups of children.

It also found that the fatty acids in fish may also protect against allergies and diseases, such as Crohn’s, while the vitamin D found in salmon may also be beneficial.

The study’s results are actually quite groundbreaking as they were able to connect the relationship between nutrition and immune-related conditions from before birth to old age.

Other oily fish such as mackerel, sardines, trout, and herring, are also rich in the same omega-3 fatty acids found in salmon and could be beneficial, too. They are thought to aid in brain development as a baby, as well as keeping a sharp memory in old age.

The Food and Drug Administration (FDA) already advises pregnant women to eat two to three servings of fish a week, as long as the chosen fish is low in mercury (avoid fish such as shark and swordfish). The FDA says the nutritional value of fish is important during growth and development even before birth. The benefits continue into early infancy, if you breastfeed, and into childhood.

“For years many women have limited or avoided eating fish during pregnancy or feeding fish to their young children,” Stephen Ostroff, M.D., the FDA’s acting chief scientist said in an FDA statement in 2014. “But emerging science now tells us that limiting or avoiding fish during pregnancy and early childhood can mean missing out on important nutrients that can have a positive impact on growth and development as well as on general health.”

Salmon is delicious, nutritious, and no one wants their baby to have asthma. With the longstanding nutritional evidence paired with the recent findings makes it a much easier choice to load up your plate with a yummy piece of fish for an already worried mommy-to-be.