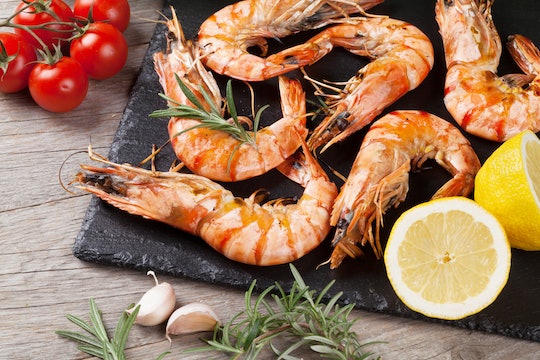 Couples Who Eat Seafood More Often May Boost Their Chances Of Getting Pregnant, New Study Finds

Waiting to get pregnant can be one of the most frustrating experiences, so anything that speeds the process along is welcome news. Now researchers are saying that eating seafood may boost couples' chances of getting pregnant more quickly. A new study, released in the Journal of Clinical Endocrinology and Metabolism, shows that consumption of seafood twice a week, or more, increased sexual activity and decreased time until pregnancy.

The team of researchers studied 501 couples in the United States who participated in a study on the ways environmental factors affect the ability to get pregnant. According to the study's abstract, couples recorded their seafood intake and sexual activity in journals. Results showed that couples who consumed two or more servings of fish per week were having sex more frequently, and that 92 percent of them were pregnant at the end of the yearlong study, according to Medical Xpress. That’s compared to a pregnancy rate of 79 percent among couples who ate less than two servings of seafood per week.

The authors' abstract explained that the study was launched to specifically look at concerns about mercury levels in fish, and whether eating higher amounts of seafood led to problems getting pregnant. But according to the Food and Drug Administration, about 90 percent of fish eaten in the United States is low in mercury and safe to eat.

For easy reference, the FDA created a chart that shows 62 types of commonly eaten seafood and rates them into one of three categories. The “best choice” category is safe to eat two to three times per week and it includes popular seafood, like light tuna, scallops and shrimp. “Good choice” fish are safe to eat once per week, according to the FDA, and include fish like halibut, snapper, and albacore tuna. Choices to avoid, or to eat sparingly, include shark, orange roughy, swordfish and a few others, as the FDA recommends. (The FDA's full list is here.)

The FDA noted that its studies show pregnant women avoid fish due to concerns over mercury, but that seafood contains important nutritional benefits for mom and baby. The FDA still recommends pregnant women consume two to three servings per week off the “best choice” list.

The Mayo Clinic backs up that advice, noting:

Seafood, which includes fish and shellfish, can be a great source of protein, iron and zinc — crucial nutrients for your baby's growth and development. The omega-3 fatty acids in many fish, including docosahexaenoic acid (DHA), also can promote your baby's brain development.

The Mayo Clinic also advises two serving per week, but warn to avoid the same types of fish mentioned on the FDA's list, saying pregnant women should stay away from large, predatory fish like shark, swordfish, king mackerel and tilefish.

But the benefits of seafood aren’t limited to only women, as this new study shows. One of the study's authors, Audrey Gaskins, Sc. D., spoke with Medical Xpress and indicated that the shorter conception times weren’t fully explained by increased sex, so there could be other biological factors at play. Gaskins explained to Medical Xpress:

Our results stress the importance of not only female, but also male diet on time to pregnancy and suggests that both partners should be incorporating more seafood into their diets for the maximum fertility benefit.

Medical Xpress also noted that ovulation, or embryo or semen quality could also be improved by a diet rich in fish.

That supports the work of another study that examined overall diet and its effect on time to pregnancy. A 2018 study published in the journal Human Reproduction found that what women ate even in the months prior to pregnancy could impact the ease of conception. Diets high in fast food and low in fruit had the worst impact, according to the paper’s abstract. Women who consumed no fast food had a 41 percent reduced risk of infertility and got pregnant 24 percent faster when compared with women who consumed fast food four or more times per week, according to the study. Compared to women who consumed fruit three or more times per day, women who ate fruit less than three times per month took 19 percent longer to conceive, the study found.

It’s hard for anyone to eat healthy all the time, but these studies are important indications that, especially when trying to get pregnant, every effort to clean up a diet could pay off. More fish, more fruit, less fast food might just be part of the equation to a healthier body, and some happy news.