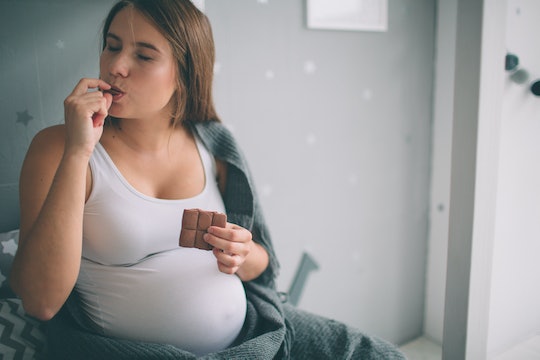 Pregnant Women May Want To Cut Back On Their Sugar Intake For This Reason, New Study Finds

Navigating dietary recommendations during pregnancy can be complicated. Keeping track of your intake of iron, folic acid, vitamin C, and more is enough to make your head spin. Fortunately, there's one recommendation that is pretty easy to follow: limit your sugar intake. Aside from known obesity and allergy risks, eating too much sugar while pregnant may have an unexpected impact on your baby: poorer childhood cognition. A recent study linked maternal sugar intake with lower mental performance, re-enforcing existing recommendations against overindulgence in sweets during pregnancy. Consuming too much sugar as a young child had a similar impact.

The study, published in the American Journal of Preventive Medicine, found that when pregnant women or their offspring consumed large quantities of sugar — more than 50 grams per day, children performed more poorly on cognition tests — particularly those related to memory or learning, according to the Daily Mail. Substituting diet sodas for those containing real sugar was also associated with poor cognition. Conversely, fruit consumption in young children was linked to higher scores on the same kinds of tests.

Researchers examined data from more than 1,000 pregnant women between the years of 1999 and 2002, going on to assess their children's diets in early childhood (between the ages of 3 and 7). Lead researcher Juliana F.W. Cohen, ScD, School of Health Sciences, Merrimack College, North Andover, MA, and Department of Nutrition, Harvard T.H. Chan School of Public Health, Boston, MA told Science Daily that "the aim of [the] study was to examine associations of pregnancy and offspring sugar consumption (sucrose, fructose) with child cognition."

Overall, according to Science Daily, Cohen and her team recommend that pregnant women consume more fruits and less processed sugar during pregnancy, as well as avoid diet soda. Children, too, should follow these recommendations early on for the sake of their cognitive ability.

This isn't the first study to suggest that taking in too much sugar during pregnancy can have a negative impact on kids. A 2017 study of 1,078 mothers and their children, published in Pediatrics, found that mom who drink more sugary beverages during pregnancy were more likely to have obese children by age 7, according to Today's Parent. Each additional serving of sugar-sweetened drinks consumed per day was associated with an extra 0.15 kg/m2 of fat mass.

But obesity and cognitive delays aren't the only risks. A separate study, published in the European Respiratory Journal in 2017, found that consuming sugar can increase a baby's likelihood of being born with allergies or allergic asthma, according to Fit Pregnancy. Researchers in the study looked at data from roughly 9,000 mother and child pairs, correlating maternal sugar intake determined via questionnaires with child allergic reactions such as eczema, hay fever, wheezing and doctor-diagnosed asthma.

For those mamas-to-be with an insatiable sweet tooth, I feel your pain. My little one has probably enjoyed a few too many brownies and vanilla lattes throughout my pregnancy for her own good. But don't fret. Cohen and her team found that increased fruit consumption at a young age benefits child cognition greatly, according to Science Daily. I, for one, will be including plenty of apples and bananas in my baby's diet once she is ready to eat solid foods.

In the meantime, sugar cravings during pregnancy can be satiated without going overboard. The occasional ice cream cone or chocolate chip cookie isn't going to tank your kid's IQ, but everything in moderation, mama. Small servings of dark chocolate can be great during pregnancy, as it may even lower your risk of developing preeclampsia, according to Baby Center. Sweet fruits, too, can soothe your sweet tooth and come jam-packed with vitamins and benefits for baby. Ultimately, if you've overdone it a bit in the dessert department throughout your pregnancy, don't panic. Future healthy choices go a long way.