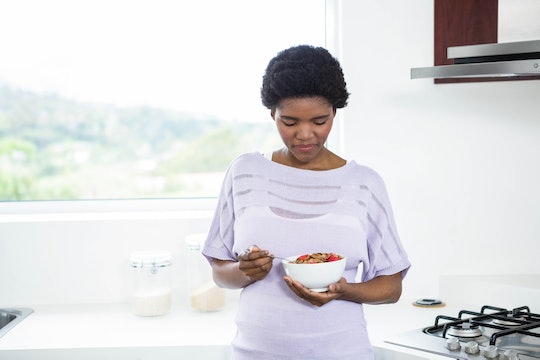 Eating Veggies During Pregnancy Could Protect Your Baby From This Condition, Study Says

Aside from chocolate chip cookies, my primary pregnancy craving has been freshly steamed broccoli with just a pinch of sea salt. I've probably eaten my weight in it over the last eight months, but that may be a good thing. Eating your veggies while pregnant has an added health benefit for baby: reducing their chance of developing asthma. Aside from being seriously tasty, greens are a powerhouse of vitamins and nutrients that go a long way towards helping moms grow happy, healthy babies.

The study, published by The Asahi Shimbun, was conducted by a team of researchers, some of whom came from the National Center for Child Health and Development in Japan. They spent about two years studying 310 groups of pregnant women and their children between May 2010 and November 2013, comparing those who ate fewer vegetables during pregnancy (78 grams per day) with those who consumed more (286 grams per day) during the first 16 weeks of their pregnancy. The team found that at age 2, those children whose mothers consumed more vegetables were roughly 40 percent less likely to exhibit asthma symptoms like wheezing, coughing, and shortness of breath than those whose moms did not, according to The Bump.

Not all veggies are created equal, though. Those high in folic acid, like spinach and asparagus, had a greater protective effect, as did cruciferous veggies that are high in iron, like broccoli and cabbage.

Along with vegetables, pregnant women should also up their consumption of fruits. Along with providing key vitamins, women who eat more fruit during pregnancy have smarter children than those who eat little to none, according to a study conducted by child development experts in Canada and published in the online journal EdioMedicine.

Child development experts in Canada found that women who eat fruit during their pregnancy are more likely to give birth to smarter children than those who do not or those who eat very little fruit. The children involved in the study whose mothers consumed more fruit throughout pregnancy performed better on developmental tests at 12 months of age, versus those whose mothers did not, according to the Telegraph.

Doctors have long recommended that expectant mothers eat a balanced diet with plenty of vegetables included. The vitamins and minerals in fruits and veggies do a lot for a growing baby, according to Baby Center. Beta carotene is important for their cell and tissue development, vision, and immune system. Vitamin C is crucial for babies' bones and teeth, as well as the collagen in your baby's connective tissue, while potassium regulates blood pressure. Folic acid is particularly important, as it helps to prevent neural tube defects and promote a healthy birth weight.

The American Pregnancy Association recommends that pregnant women get at least 70 milligrams of vitamin C each day, which can be found in fruits like oranges, grapefruits and honeydew, and vegetables such as broccoli, tomatoes, and brussels sprouts. Expectant mothers should also consume 0.4 milligrams of folic acid in order to prevent birth defects, according to the APA. You can get folic acid from dark leafy greens, for example. Along with prenatal vitamins, pregnant women should aim to consume at least two to four servings of fruit and four or more servings of vegetables daily in order to get those vitamins to their growing babies.

Finding the motivation to eat your peas and carrots in the midst of morning sickness is no easy task, but fortunately fruits and veggies come in a lot of shapes and sizes. If you can manage to work them into your diet, you and baby will reap the benefits.