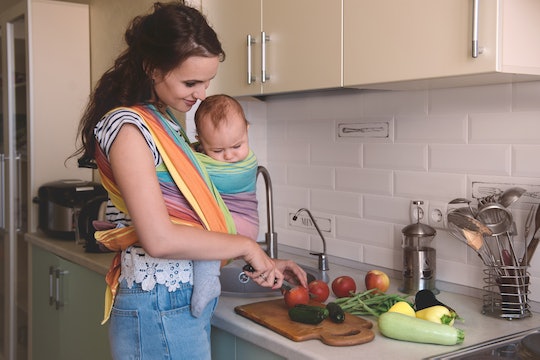 Kids are notoriously picky eaters. You try to serve them carrots, and they want chicken nuggets. You try to slip in some broccoli and they demand ice cream for dinner. It's no lie that every mom wants to feed their child a heathy diet and these picky habits can certainly get exhausting. But, as a recent study suggests, eating veggies while breastfeeding may actually make your kid a healthy eater from the very beginning.

Here's why: By exposing babies to the flavor of vegetables through breast milk, moms can make the taste less of a shock to them once they start eating solid food, according to researchers at the Monell Chemical Senses Centre in Philadelphia, as reported by The Daily Mail.

Researchers studied 97 women — an admittedly small sample size — who drank beetroot, celery, or carrot juice and tracked their children's eating habits as they grew up. The women included in the study were then divided into five different groups: Three of the groups drank half a cup of juice daily for one month prior to nursing, each group starting at a different time — at 2 weeks, 6 weeks, and 10 weeks old, respectively; the fourth group drank their juice for three full months, having the first when the babies were 2 weeks old; and the fifth group of moms drank no juice at all while breastfeeding.

All of the babies began eating solid food when they reached the 8 months old. At this time, they were reportedly offered three types of cereal: plain, carrot, or broccoli. According to the researchers, the babies with moms who drank juice preferred the carrot flavored cereal over the plain and the broccoli flavors. Additionally, those with moms who drank juice for the longest period of time ate more of the carrot-flavored cereal and ate at a more rapid pace.

The apparent preference for carrot flavor may be due to preconditioning during breastfeeding. Compared to breast milk, the taste of vegetables can be strong for babies just learning to eat solid food. When they taste vegetable flavors in breast milk, their tastebuds are already used to them by the time they try real, solid vegetables.

As reported by The Independent, lead study author Julie Mennella pointed out that children experience taste through their mothers first:

Every baby’s sensory experience is unique, but the flavor of their first food, beginning in utero, is dependent on what mum is eating.

A similar study was conducted nearly a decade ago in Denmark that found that the flavor of breast milk can impact eating choices. While these researchers did not examine vegetables specifically, they did find that food consumed by a mother can flavor breast milk for up to eight hours. This study, published in Physiology & Behavior, also examined how these tastes impacted future eating habits. According to ABC News, lead author Helene Hausner explained:

During infancy and childhood, individuals are very receptive to sensory and cognitive learning, and the behaviors established in this period are most probably important for later preference and food behaviors.

While drinking a glass of V8 isn't guaranteed to make your kids nuts about veggies, anything that can help prevent picky eaters is definitely a win. Although this was admittedly a small study, the science behind these results is a promising lead to encouraging healthy eating habits.