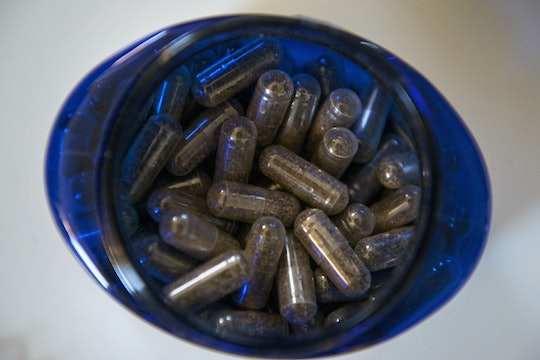 Eating Your Placenta After Giving Birth Does Nothing, According To Science

Without trends, people wouldn't be influenced in how to dress or live their lives. There is nothing wrong with being a trend follower (or a trend setter) but sometimes, trends — in everything from fashion, to lifestyle, to even childbirth — can get a little out of hand. Eating your placenta is one of those childbirth trends that has only increased in popularity in the recent years due to the alleged health benefits associated with it. But, expecting mothers might want to do their research before going ahead and taking a bite. This is because eating your placenta after giving birth does nothing, according to a new study. Expecting mothers take note.

The study even found that many physicians were unsure and uninformed about placenta consumption, according to the Washington Post and 60 percent of physicians that were surveyed in the study weren't sure whether they should even be in favor of eating the placenta. This medical uncertainty shouldn't sit right with most new moms.

Your doctor has probably explained what a placenta is to you by now, but here's an anatomy refresher, just in case. The placenta is the organ developed in the uterus during pregnancy that provides oxygen and nutrients to the baby, according to the Mayo Clinic. The placenta is often pushed out by the mother following the delivery of the baby. Although you're not required to take your placenta home with you or eat it, it is custom from certain cultures to do things with the placenta afterwards, according to the Mayo Clinic, like burying it or eating it.

After giving birth, the placenta can be ingested in different ways, according to the study — like eaten raw, cooked, roasted, dehydrated, in pill form, in smoothie form, or served with a glass of wine (just kidding). People who eat it want to seek the "magic" benefits that the placenta allegedly possesses. Those who advocate eating the placenta, according to the Guardian claim that it boosts milk production, fights postpartum depression, and increases energy. But this is all purely anecdotal, as the study states.

This past summer, the Centers for Disease Control and Prevention noted that eating your placenta can actually be a risk. The CDC reported that a woman in Oregon passed along a bacteria infection to her breastfeeding child after her placenta pills were infected with the bacteria infection, according to Forbes. According to the CDC, placenta capsule ingestion should be avoided, especially since there are no regulations for processing the placenta to be consumed. If the mom hadn't consumed her placenta pills and breastfed her baby afterwards, the baby would have been fine.

Because there is no agency to monitor placenta pill processing facilities, you really have no idea what you're consuming (other than your placenta, hopefully).

Just because this study found that eating your placenta isn't scientifically proven to be beneficial doesn't mean that you won't find the benefits in eating it yourself. Kim Kardashian and Nikki Reed have raved over the benefits of eating their placenta after giving birth and their endorsements are stellar.

But if you were hoping that eating your placenta would make you healthier or stronger or less hormonal, there is nothing to prove that it does any of it. Before partaking in the latest fad, especially when it comes to child birth, do your research. You might be surprised with your findings.