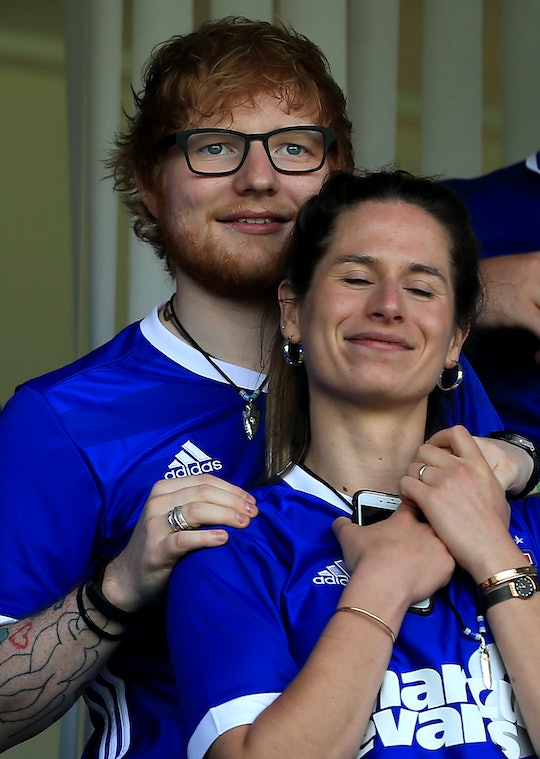 Sounds like Ed Sheeran is about to have another "perfect" love in his life. According to multiple media outlets, Sheeran and his wife Cherry Seaborn are reportedly expecting their first child together.

While Romper's request for comment from Sheeran's representatives was not immediately returned, Us Weekly and The Sun have reported that the couple has a baby on the way. "They are currently keeping details of the baby's sex and due date just to family until after the baby is born, which will be soon," a source told Us Weekly. "Ed will make a great dad. He loves kids, and he built his big home in Suffolk [England], with the plan to start a family."

Meanwhile, a source told The Sun, that the 29-year-old singer and his longtime sweetheart, who got married in Febuary 2019, are "over the moon" with excitement and have been "making the last of the preparations at home, and the baby is expected later this summer." Seaborn was spotted in March in public with "a hint of a bump", according to The Daily Mirror. But the couple is reportedly planning to keep a relatively low profile until the baby arrives. "It's a really happy time and their families are totally delighted for them and cannot wait to meet their new arrival," a source told The Daily Mirror.

Sheeran has previously said that he wants to start a family. In 2018, for instance, he told the Daily Star that things will probably change for him when he becomes a dad. "My ambition is going to go to zero when I have kids," he told the publication. "I am going to be like, 'I do not really care anymore as I have another life to take care of.' It is totally understandable because you have children and your ambitions shift to be like, 'I want to be a good father.'"

Although the baby is reportedly set to arrive soon, don't expect Sheeran to post about his wife or new baby on Instagram. The singer announced this past December that he was "taking another break" from social media to breathe, travel, write, and read. "I promise to be back with some new music when the time is right and I've lived a little more to actually have something to write about," he wrote in the post. Becoming a father and having a newborn will surely give him plenty of inspiration for new music, after he's gotten some rest, of course.