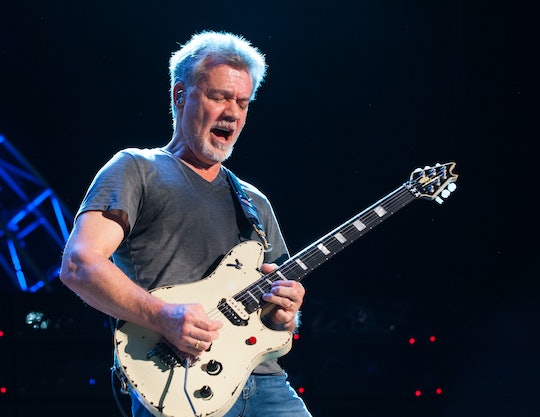 "I can't believe I'm having to write this," Van Halen's son Wolfgang said in a statement shared Tuesday on Twitter. "But my father, Edward Lodewijk Van Halen, has lost his long and arduous battle with cancer this morning. He was the best father I could ever ask for. Every moment I've shared with him on and off stage was a gift."

"My heart is broken and I don't think I'll ever recover from this loss," Wold continued. "I love you so much, Pop."

According to TMZ, the mouth cancer Van Halen was diagnosed with in 2000 developed into throat cancer that forced the musician to seen radiation and chemotherapy treatments. Sources close to Van Halen told TMZ doctors had discovered his cancer had recently metastasized to his brain and other organs.

News of Van Halen's death has left fans and friends heartbroken, including former Van Halen singer Sammy Hagar. "Heartbroken and speechless," Hagar tweeted alongside a throwback photo of himself with Van Halen. "My love to the family."

Tributes and condolences for Van Halen poured in from his fellow musicians. "I am devastated at the news of the passing of my friend Eddie Van Halen," country singer Kenny Chesney tweeted. "He was a friend and a hero to anyone who has ever picked up a guitar and had a dream."

Nikki Sixx of Mötley Crüe remembered Van Halen as "the Mozart of rock guitar" and said he was "crushed" by the news of the rocker's death. "You changed our world," Sixx tweeted. "Travel safe rockstar."