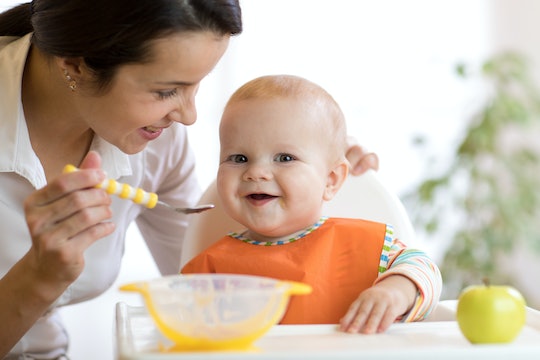 Feeding Your Baby Eggs Might Do Wonders For Their Brain, Study Says

My mom would feed me scrambled eggs when I was an infant. It's one of the first table foods she gave me and my sisters when we were able to start eating solids. And it's no wonder: Cracking open and cooking an egg takes little time, so you have a nutritious meal in seconds. But did you know eggs have another benefit? According to new research, eggs can promote better brain development for babies. I'd say that's eggcellent.

A new study published in The American Journal of Clinical Nutrition found that eggs could provide infants with vital nutrients that supports brain development and function, according to Laboratory Equipment. A group of researchers from Missouri, Texas, and Maryland discovered that babies who began eating eggs at 6 months old had remarkably higher blood concentrations of choline, a vitamin-like essential nutrient for memory and muscle control, and docosahexaenoic acid (DHA), an omega-3 fatty acid that acts as a structural component of the brain and is necessary for brain growth and function.

The findings are based on a a randomized, controlled trial the researchers conducted in Ecuador in 2015, according to Laboratory Equipment. They randomly assigned infants ages 6 to 9 months old to be fed one egg per day for six months, and compared the results to a control group that did not receive eggs.

Like milk or seeds, eggs are designed to support the early growth and development of an organism and are, therefore, dense in nutrient content.

Iannotti added that eggs provide essential fatty acids, proteins, and nutrients at levels that are similar or higher than what's found in meat and fish, "but they are relatively more affordable." To this end, she told Science Daily,

Eggs have been consumed throughout human history, but the full potential of this nutritionally complete food has yet to be recognized in many resource-poor settings around the world.

But the team of researchers didn't only discover that feeding eggs to infants at an early age could promote better brain development and function. Another study based off of the same 2015 trial, published in July in Pediatrics, found that feeding babies eggs starting at 6 months old improved linear growth. (Put in another way: The children who received eggs showed an increase in their length for their age.) The findings also showed that consuming eggs early reduced rates of stunting and being underweight in infants.

Eggs also have a whole host of other health benefits. Eating eggs can raise your good cholesterol levels, reduce heart disease risk, promote better eye health, reduce your risk of stroke, and can aid in weight loss, according to Healthline. That's because, in addition to choline and DHA, egg yolks are rich in vitamins A, D, and E, vitamins B1, B2, B6, B9, and B12, calcium, iron, phosphorous, zinc, and selenium. Egg whites, on the other hand, contain only vitamin B2, choline, and selenium, according to Paleo Leap.

That's not all. Consuming eggs during pregnancy and breastfeeding can also help brain development because you're being supplied choline, according to BBC Good Food. Eggs also have a healthy dose of bone-protecting vitamin D, so eating eggs as a regular part of your diet can help prevent osteoporosis and rickets, BBC Good Food reported.

Like my mom, I started to feed my son scrambled eggs after he turned 6 months old (though, arguably, not as often as I had them as a baby). And I still cook him eggs to this day. Now I know it's the best decision I could have made.