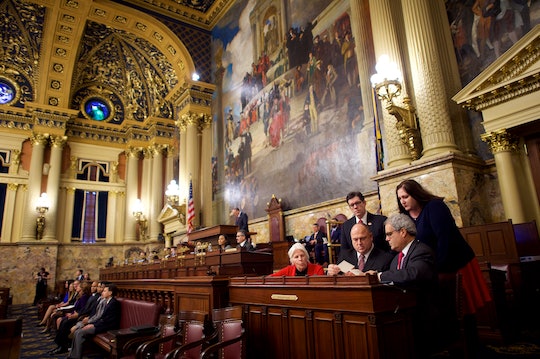 People weren't exactly expecting the Electoral College to make any game-changing decisions, but Monday's votes took a strange and unexpected turn in Washington State when an elector voted for Faith Spotted Eagle — a real person who is a celebrated Native American and a prominent environmental activist — instead of Hillary Clinton. The vote came from a so-called "faithless elector," while three others in the state voted for former Secretary of State Colin Powell after all of the state's electors refused to cast their votes for the former Democratic nominee.

The former secretary of state ultimately lost a third of Washington's votes on Monday after the Democratic electors unexpectedly switched their votes. Clinton was expected to get all of 12 of the state's electoral votes, as she had won the popular vote for president last month.

According to local news station KOMO, this is the first time in four decades that members of the Electoral College in Washington have swayed away from the state's popular vote for president. The last time it happened was in 1976 when Mike Padden of Spokane Valley, who is currently a Republican state senator, voted for Ronald Reagan instead of Gerald Ford, who had won the state.

Although it was highly unlikely that the majority of the Electoral College would change their minds and give the presidency to Clinton (or another candidate), it hypothetically could have happened if they decided they weren't happy with President-elect Donald Trump. As KOMO pointed out, Clinton's tally of votes will now be lower than her 232 votes on Election Day after the four state electors went off-course because a candidate needs 270 electoral votes to win.

According to The New York Times, the Electoral College affirmed the November's election results on Monday that Trump will in fact be the nation’s 45th president as he surpassed the 270-vote threshold with more than 300. The results will officially be announced on Jan. 6.

Protests assembled all over the country in recent days and on Monday, urging electors to vote for someone other than Trump for the presidency. So while the Electoral College ultimately reaffirmed its decision to elect the New York Republican, some electors, like in Washington, showed that they weren't happy with the election results.

But, those "faithless electors" in Washington were fined $1,000 each for ignoring the results of the state's popular vote.

While the electoral vote turnout in Washington is yet another strange turn in this crazy and unprecedented election cycle, it didn't change the results. Rather, it showed that the nation is still more divided than ever before.