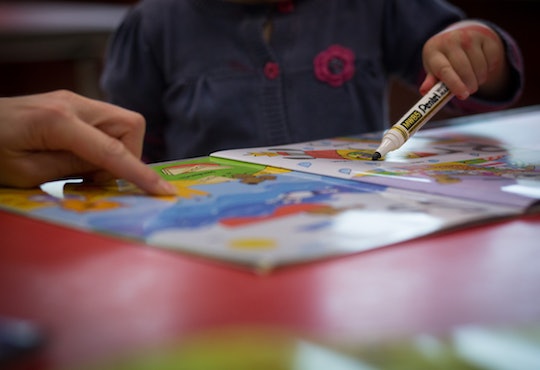 According to a new study published by Science, 5-year-olds don’t seem to discriminate between genders when deciding whether or not a person is "really, really" smart, but 6- and 7-year-olds appear to think men are inherently smarter than women in compelling numbers. How the sudden shift develops in such a short amount of time is not totally clear. But the findings are clear — most elementary school girls think boys are smarter, and that's really troubling and should answer any person who was asking "Why were women marching on Washington?" after the president's inauguration.

The findings in the study featured in Science are very troubling. According to the authors:

The four studies reported here (N = 400 children) show that, by the age of 6, girls are less likely than boys to believe that members of their gender are “really, really smart” — a child-friendly way of referring to brilliance. Also at age 6, the girls in these studies begin to shy away from novel activities said to be for children who are “really, really smart.”

So, according to this study, not only do these girls think that boys are smarter than girls in general, but they also personally start turning down activities that they think are for "really, really smart" children. If they don't believe in their own brilliance, why would they believe other girls are "really smart" in turn?

There were several sections of the study conducted in order to come to the conclusions the authors ultimately did. It wasn't as simple as asking kids of different ages, "hey! Are boys smarter than girls?"

For example, in one part of the study, 5-year-olds were told a story about “a really, really smart person” (again, to relate to the kids in their terms), and were then asked to guess who that person was, based on two photos they were shown. One of those photos pictured an adult woman, while the other featured a man. Otherwise, the pictures were nearly identical, and the 5-year-olds usually identified their own gender.

However, the 6- and 7 year-old girls answering the same question were “significantly less likely” to chose the female photo, according to an article on Bloomberg.com. And apparently, the results were similar when the kids were shown photos of children instead.

Study co-author Andrei Cimpian, a psychology professor at New York University, said it best when he was quoted as saying, "This is heartbreaking, according to The Independent.

Not only do we see that girls just starting out in school are absorbing some of society's stereotyped notions of brilliance, but these young girls are also choosing activities based on these stereotypes.

The authors did have a note about the sample of children they surveyed as part of the conclusion of the article, however:

It will be important to test whether these findings extend beyond a middle-class, majority-white U.S. cultural context and to comprehensively investigate the sources of the “brilliance = males” stereotype in children’s environments.

It seems further study is needed to determine the source of the stereotype and the mindset young children seem to develop that reinforces these ideas about who's "really, really smart." But the conclusion the authors found remains worrisome: that it appears many children absorb the idea that brilliance is for boys at a very young age.