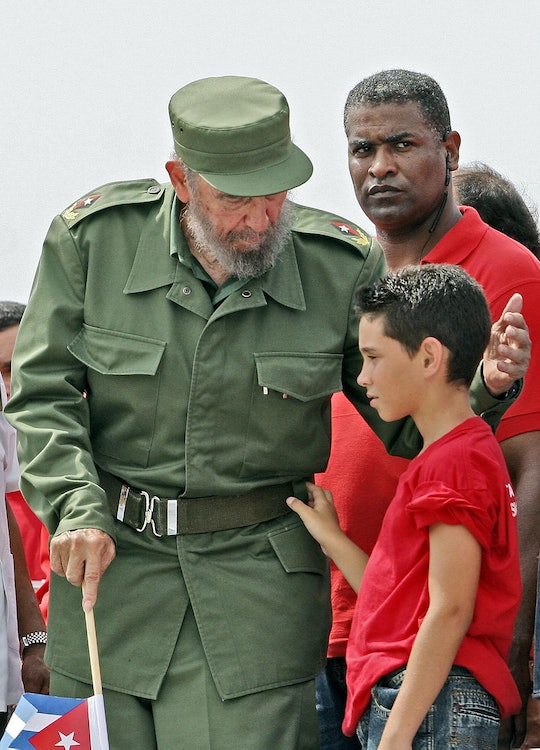 Fidel Castro was the guest of honor at Elian Gonzalez's 7th birthday party. The party was a celebration for the boy, but the Cuban leader's presence was a symbol of his own success in returning Gonzalez from the United States to his father in Cuba, after his mother's death while attempting to reach Miami as a refugee of Castro's communist regime launched a custody dispute between the two nations in 1999 and 2000. Having grown into an outspoken supporter of the controversial dictator's revolution, Elian Gonzalez praised Fidel Castro after Castro's death on Friday at the age 90, in an interview that aired on government-run television. More than 17 years after the conclusion of the international controversy that exacerbated the strained political relationship between the United States and Cuba, Gonzalez fondly remembered Castro as a father figure.

"Fidel began to be that father like all who start off as as fathers, but the difficult thing is for a father to become a friend without ceasing to be a father," Gonzalez, now 22, said in Spanish Saturday, ABC News reported. "He started as that father until he became a friend. And like my father, I wanted to show him everything I achieved so that he could be proud of me."

Gonzalez — whose alternate life trajectory easily could have seen him growing up American, perhaps even denouncing Castro and the atrocities he committed against the Cuban people — fondly remembered how Castro had attended his sixth grade graduation and had invited him to lunch shortly before he graduated from high school.

A bit of background for those who've forgotten or were too young to remember: The Elian Gonzalez debacle began on Thanksgiving Day 1999, when fisherman rescued a 5-year-old child, Gonzalez, as he clung to a raft off the coast of Ft. Lauderdale, Florida. He was one of the few survivors in a of 14 trying to illegally reach the United States; Twelve of his party drowned when they encountered a storm. Gonzalez's mother, who was divorced from his father, was among them, and the ensuing fight for custody of the of the boy between his father and his relatives in Miami ballooned to the level of international incident, at Castro's urging. Amid fervent protests, U.S. courts ultimately determined that Gonzalez should live with his father, and after a tumultuous SWAT team raid of the Miami home where he was living, Gonzalez was returned to Cuba in June 2000.

According to CNN's Patrick Oppman, Gonzalez's Miami relatives feared that he would become a "brainwashed trophy for Castro in his long-running feud with the U.S." if he were to be returned to Cuba. Their predictions may not have been far off; In 2013, Gonzalez, now a devoted admirer of his new father-figure, reportedly told a state-run media outlet in Cuba:

I don't profess to have any religion, but if I did, my God would be Fidel Castro. He is like a ship that knew to take his crew on the right path.

His convictions about Castro have not wavered in the year since, either. In 2015, according to CNN, Gonzalez was a cadet studying industrial engineering with plans of joining the Cuban military post-graduation. At the time, he called his life in Cuba "a debt I owe to the Cuban people." And upon the news of Castro's death, almost 17 years to the day after he was discovered floating on that raft, Gonzalez again praised Castro's legacy, during an interview with state-run media reporters:

Even though Castro's death prompted Cuban exiles in the United States to celebrate in the streets, Gonzalez's story shows that some within the country are still incredibly dedicated to the onetime president and the ideas he represents.