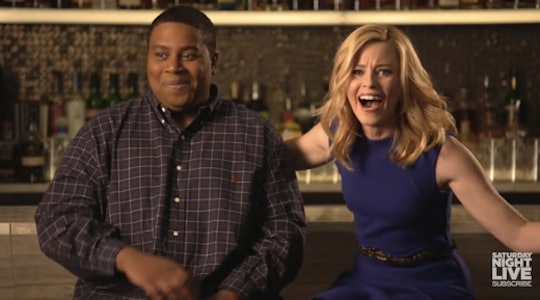 In some ways, Donald Trump is the hardest act to follow, and the easiest act to follow. The hardest, because the GOP presidential candidate can brag about his huuuuge ratings — Trump's Saturday Night Live episode was the most-watched in four years. But the easiest, because the GOP presidential candidate can't brag about his huuuuge comedy skills — Trump's Saturday Night Live also happened to be one of the most reviled in, well, probably four years. Or ever. So, yes, Elizabeth Banks' Saturday Night Live promos are a breath of fresh air — an offering from a woman who is almost universally liked, and who everyone can universally agree is incredibly hilarious.

That's not to say Banks doesn't also have a huge audience eager to watch her on the sketch comedy show. Banks, who is hosting the comedy show this Saturday alongside musical guest Disclosure, is of course shilling The Hunger Games: Mockingjay — Part 1, which hits theaters Nov. 20. Which means an Effie Trinket parody, naturally, and... is it too much to hope for a Jennifer Lawrence cameo?

Either way, Banks' episode is going to be solid, trust me. More than you can trust Kenan Thompson with trust falls, of course.