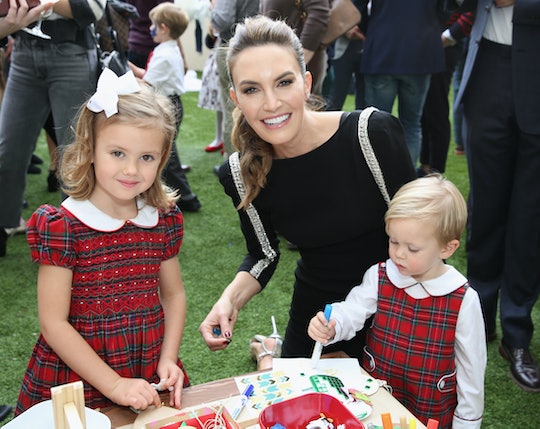 Don't mess with a mama bear. Celebrities are always getting trolled by people on social media, but sometimes it just goes too far. Fans often assume they know what goes on in celebrities lives and, somehow, feel it's appropriate to give their two cents, which some stars — like Elizabeth Chambers — just won't stand for. The actress was recently slammed by a troll for taking some time for herself and her husband to celebrate their anniversary, and she was quick to hit back and put this commenter in their place. In fact, Elizabeth Chambers' recent response to a mom-shamer is expert-level, so take notes.

The 36-year-old Criminal Minds actress recently posted a photo of herself on Instagram out and about in London without her children, and one commenter felt the need to weigh in on how much time she spends with her family. The mom-shamer in question suggested that Chambers leaves her kids, her 4-year-old daughter Harper and 2-year-old son Ford, often "to go shopping and take pictures," which didn't sit well with the actress.

"You certainly leave your children a lot to go shopping and to take pictures of yourself," the Instagram user commented on her photo.

Not that she needed to explain herself, of course, Chambers quickly responded to the commenter, assuring them that she hasn't "shopped a bit," and left her children for a little over a day with her husband, actor Armie Hammer, to celebrate their anniversary. The actress went on to note that "focusing on your marriage" is key, and worked in one last not-so-subtle jab before moving on with her day.

"Haven't shopped a bit. I left them for 30 hours to be with my husband for our anniversary. If you had kids, you would know that focusing on our marriage is actually on e of the best things you can do for your children. I'm an amazing mother, always there for my family and work my a** off," she hit back at the commenter.

And finally, Chambers took a page from Ariana Grande's book, closing out her message with a simple, "Thank you, next." Moms, that's how it's done.

Chambers often speaks openly often about parenting, and there's no denying she's hands-on with her children. In August 2017, for instance, she opened up about what it's like owning a business and raising kids. At the time, Chambers wrote on NBC's Better that she's hopeful her kids will one day work in her San Antonio, Texas, business Bird Bakery, revealing that she often takes them in and they enjoy doing little tasks around the shop.

"My hope is one day my children will work at the bakery, starting from the ground up and eventually take my place in running the business," she wrote in 2017. "Our employees are so welcoming to them. When we come in everybody greets Harper, my daughter, and they put her right to work! She likes to be involved in every aspect of the bakery. She'll tidy up the floor with her little dustpan or say hello to whomever I'm speaking with on the phone. Everybody really involves her, and I feel like there is a real understanding between our children and our employees and that's so important to me."

Chambers has also stressed the importance of self-care as a mother. Speaking with InStyle in 2017, she shared, "I make it a priority to plan date night once a week, make time for a massage or at the very least a bubble bath when I can. While it can become difficult and I think we all have a tendency to put ourselves last, I have found that if I make a conscious effort to make time for my husband, and myself it goes a long way."

Parenting isn't easy, and there is no one way to do thing. But gets easier when you tune out trolls judging your every move, so take a page from Chambers' book and put yourself first once in a while. You deserve it.